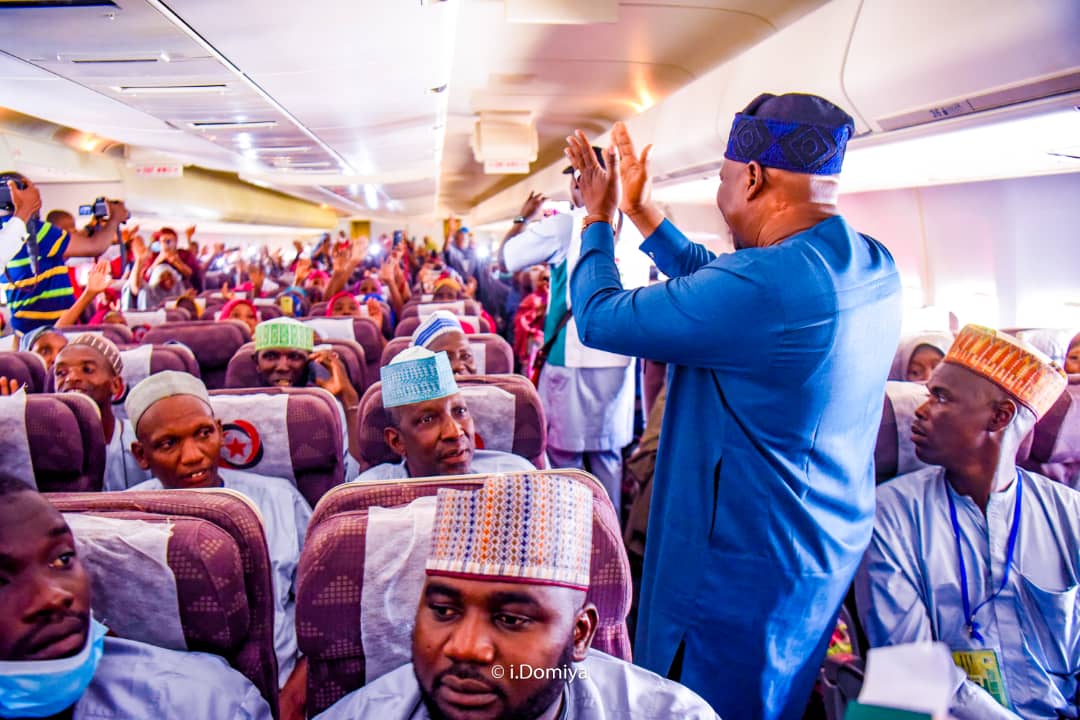 Governor Ahmadu Umaru Fintiri of Adamawa while bidding the pilgrims farewell appealed to them to pray for peaceful conduct of 2022 general elections during their stay in the holy land.

The Governor observed that as the country is entering another era of political campaigns it behoves on the Pilgrims while in Saudi Arabia to pray for peaceful transition of government.

According to the Governor, Nigeria needs credible and God fearing leaders to steer its affairs for unprecedented development hence the need for the faithfuls to pray to Allah to that regard.

He cautioned the pilgrims to shun away from taking any illegal substance such as hard drugs into the holy land and abide by the rules and regulations of the Kingdom of Saudi Arabia.

The Governor admonished the faithfuls to perform the Hajj with good intention and utmost commitment and seriousness so as to fetch abundant rewards from Allah.

He urged the pilgrims to utilize the opportunity given to them by Allah to perform the Hajj and pray for peace and tranquility as well as development of their state and Nigeria as a whole.

The Governor who took his time to go round and greet the pilgrims inside the plane was received upon his arrival at the airport by this year Amirul Hajj, Amna Shellegn, Isa Dasong and other officials of State Pilgrims Welfare Commission.

Hajj 2022: 651 Intending Pilgrims Set to Depart For Saudi From Taraba

Muslims in Numan local government area of Adamawa State are seeking the assistance of well to do in the society for completion of
N10m “Sabon Tasha” mosque project.

This is contained in a statement released and signed by mosque committee chairman, Malam Yusuf Aliyu Umar on Sunday.

According to the committee chairman the 200 capacity mosque project has so far gulped over N7, 615, 700 naira, funds donated by some Muslims.

The statement says the mosque now requires N2, 384, 300 to complete the project.

It therefore called on the wealthy and other Muslims to help and complete the project for abundant reward from Allah. 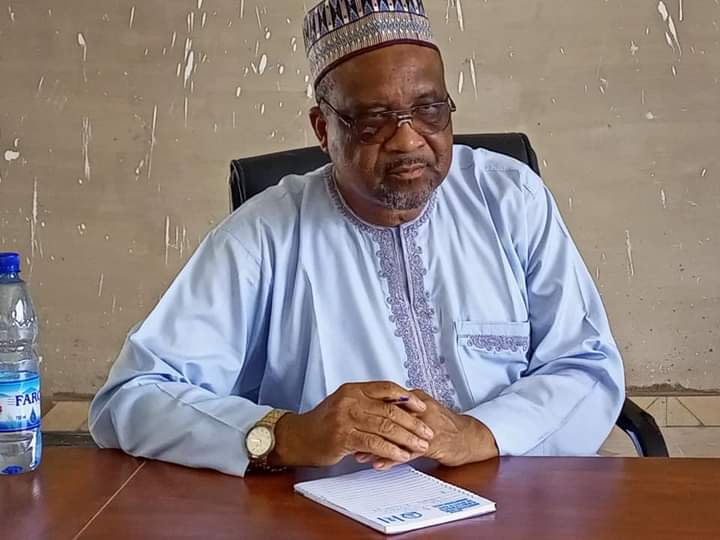 Muslims Council of Nigeria,Adamawa state branch has alleged a sinister plot of blocking its members (Muslims) from voting during elections and participating in the voters registration by some unscrupulous elements.

The Council disclosed the allegations in Yola weekend during an emergency meeting with all its executives from the 21 local government areas in the state alleging that intelligence report at its disposal has revealed that Muslims are being blocked to cast their votes or register during elections in some local governments in the State.

Chairman of the Council,Gambo Jika decried that in some of these communities where their members are in the minority are allegedly subjected to all manner of intimidation and harassment to the extent of sending them to their homes denying them of their civil rights.

“We the Muslims Council of Adamawa state summoned this meeting purposely to discuss and proper solutions to some the challenges facing us in the state and Nigeria as a whole especially on the ongoing voter’s registration which has been turned to be like war.

“There are many places in some local councils in the state(Adamawa) where Muslims are not allowed to go and vote even after being registered.In some cases,unpatriotic vigilante groups are used to harass our people not to go polling centres in their communities.

“We have it on record that,this unacceptable utterances occurred in the previous elections but we will resist any attempt henceforth.we call on security agencies,traditional leaders and Independent National Electoral Commission (INEC) to ensure people are allowed to cast their votes or register without any molestation”.Jika declared.

He cried out to the state government and security agencies to as a matter of utmost importance address the alleged practice noting that if not tackle with the seriousness it deserved,the situation can degenerate into crisis.

He further admonished all and sundry to come out and register to enable them beat the additional two weeks announced by INEC ahead of the 2023 elections.

An impeccable source interviewed by peoples Daily on condition of anonymity listed the affected local government areas to include; Numan,Michika,Lamurde and Mayo-belwa respectively.

Reacting to the development,Director General on media and Communications to Governor Ahmadu Umaru Fintiri,Comrade Solomon Kumagar said the issue is a sensitive one in nature and needed more time to find out before commenting on it.

When contacted over the alleged security breach,Spokesman of the Adamawa state Command,S.P Suleiman Nguroje said that he hasn’t been briefed on such development yet promising to cross check and get back to this reporter but couldn’t do so up to the time of filing in this report. 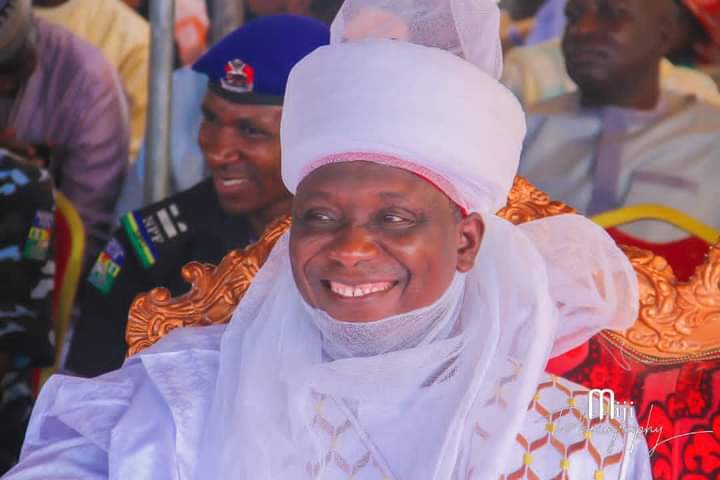 Speaker of the Bauchi State House of Assembly Rt. Hon. Abubakar Y Suleiman has congratulated Muslim Umma on the occasion of this year’s Eid-El-Kabir celebration.

The Speaker said that the period which signifies sacrifice and devotion to the worship of the Almighty Allah as exemplified by Prophet Ibrahim (AS), reminds entire Muslims of the need of total submission to the will of Allah and make more sacrifices Him, the Islam and the humanity.

He enjoined Muslims to be their brothers’ keepers by offering helping hands, showing compassion, brotherhood, love and shunning backbite, enemity and dangerous envy among others.

Rt. Hon. Abubakar Suleiman who is also the Chairman of the Conference of Speakers of State Legislatures of Nigeria, tasked Muslim faithfuls to use the period to extend hands of kindness to others, pray fervently for Bauchi State and the Country, for security, economic prosperity, development and hitch free 2023 general elections.

The Speaker who is the Bauchi State Deputy Amirul Hajj and Leader of State Pilgrims in Saudi Arabia, felicitates with the State pilgrims for getting the rare privilege of performing this year’s Hajj and admonished them to pray for the State and the Country.

He restate the commitment of Bauchi State House of Assembly under his leadership on quality representation and legislations that would continue to provide dividends of democracy to the people of the State.

The Speaker expressed satisfaction on the way and manner the Executive Governor of Bauchi State His Excellency Senator Bala Abdulkadir Mohammad is efficiently running the affairs of the State, saying that the State has never gotten it this great, in term of purposeful leadership and developmental milestones.

He prays to Almighty Allah to continue guiding the leaders and the led aright, bring to an end problems bedeviling the Country, provides more developmental and economic breakthroughs.