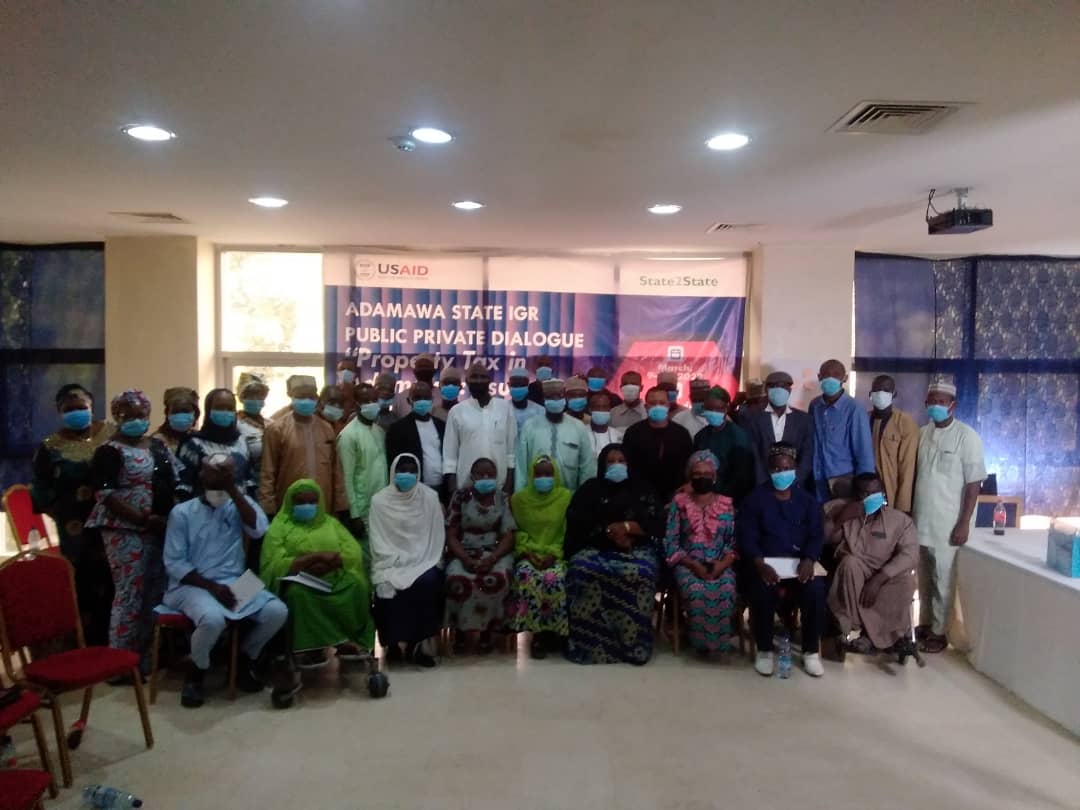 The event which took place at American University of Nigeria hotel AUN Yola, drew participants from key ministries, departments and agencies which include, Adamawa Board of Internal Revenue, ministry of land and survey, civil society organizations, National association of private schools and traders associations among others.

In his welcome speech,the Adamawa State team lead of State to state,Mr Machill Maxwell said the workshop is one of the series of activities being conducted in Adamawa which focuses on how to generate more revenue for state to enable government use the fund to provide better services to the people.

He also explained that the dialogue was to enlighten people on the importance of property tax as many people do not have much knowledge on what property tax is all about.

Mrs Mamuno lauded USAID state to state activity in Adamawa for coming up with the sensitization programme on property tax reiterated the support of the state assembly on the issues.

During the workshop,the participants discussed extensively on the meaning of tax ,progress made on property tax enumeration, property tax laws, policies and regulations and property valuation assessment among others.

In an interview, some of the participants,Mrs Saratu Chinda from Adamawa State board of internal Revenue, Mrs Hannatu Solomon women leader Jimeta ultra modern market, Engineer Sani Sabo; state chairman of the joint national association of people living with disability Adamawa State chapter said during the workshop, they had a better understanding of property tax, ongoing efforts on it by government, challenges faced and the role of citizens and civil society organizations in that regard.

They also identified areas that require attention and action to include establishment of relevant laws, policies and regulations property tax, modalities for property valuation assessment, as well as improved technology citizens participation and knowing the importance of social contract.

The President Women In Mining in Nigeria (WIMIN) Mrs Janet Adeyemi at the Research Validation and Policy Dialogue on Wednesday. Said they need space to invest equally in exploration and governance.

She said that many countries have ensured that their policies reflect gender as nobody wants to be reckoned with a society that has no respect or concern at the least, for its women and children.

“It is my believe that in this global journey to progress, no one wants to be tied down or dragged behind by culture or sentiment.

“That is the attitude I expect of the Policy Dialogue we shall hold in this programme.” She said

She explained WIMIN sent its research team to conduct an in-depth research on the extent of Women and Child Rights Violation in the Mining Sector in Bauchi State.

“This programme validates the research conducted in Bauchi State and will open our perspective to the human rights issues in the local mining host communities.

“Such as Gwana Mining Community, Toro and other places we have our spotlight on.”

“As we discuss policy matters with stakeholders, we want to urge the State Ministry of Natural Resources to direct its attention on the gender-based issues in the mining sector,” she said.

“The reasons are varied and complex, ranging from a lack of regulatory frameworks and sector-specific gender equality policies to entrenched social norms and economic inequalities.

“Women often find themselves excluded from decision-making processes, underrepresented in the mining workforce, and facing discrimination in and around mine sites,” he said.

Baba stressed that to reach gender equality in mining, women’s voices need to be heard in mining workplaces, affected communities, and wherever important decisions are made. 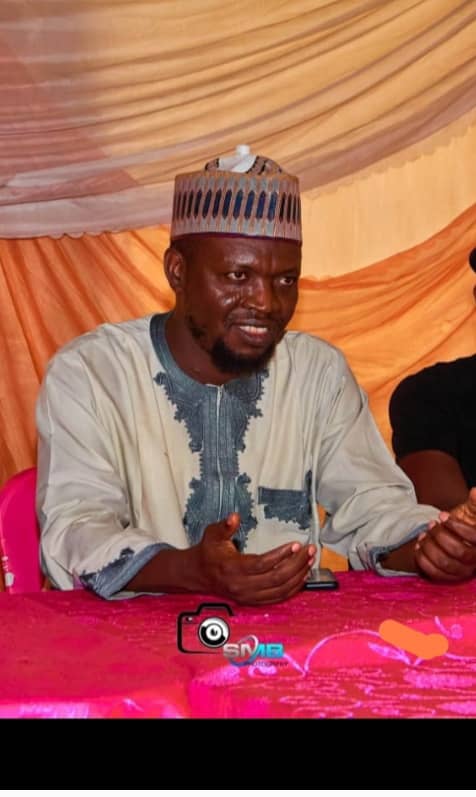 The Director General of Sunna TV in Bauchi, Dr Ibrahim Adam Dinisa also an Islamic Cleric pledged to sensitize the general public on the acceptance and dateline of redesigned naira notes by the Central Bank of Nigeria (CBN).

Disina made the pledge when the Director Medical Services of CBN, Dr Abdulkadir Jibrin led officials of the Bank on a courtesy visit to Sunna TV in Bauchi weekend.

He commended CBN for taking measures to strengthen the value of the Naira, especially the recent redesigning of the higher-denominations of the banknotes.

“The sensitisation was very timely and very commendable because I also think it was a reality but with your visit it shows the Bank is out for the New Naira Notes.

“We will do our part at Sunna TV through Programmes and educate the general public on the objectives of redesigning naira notes and the dateline that old notes will seize to be legal tender ,” Disina said.

As media proprietor and Islamic clerics we are here to partner with you on sensitisation on the acceptance and deadline of the redesign naira notes.

To let also let people know that as from 31st January, 2023, the old notes will size to be a legal tender and as at 1st, February, 2023, the new note will come to play completely,

“We are not going to use the old notes anymore. Anybody that has the old notes should take it to the bank before January 31st 2023 to get the new notes.” Jibrin stated

He said CBN has started a spot check on banks across the state, threatening to sanction any bank found dispensing the old notes

‘Banks are not supposed to feed the Automated Teller Machines with the old notes “You can still collect the old notes over the counter and use it but return to the bank before 31st of this month.

“We observed in Bauchi the ATMs are dispensing new notes. We have given them and it is a sanctionable offense for the commercial banks to dispense old notes,” The Director said.

The Central Bank of Nigeria,( CBN) has taken a sensitisation campaign to Wunti Market Bauchi, 13 days to the deadline set for the stoppage of the circulation of the old Naira notes by January 31, 2023 target.

Mr Sulaiman Laido, acting Controller CBN Bauchi Branch, while during the sensitization at Wunti market Bauchi on Tuesday said January 31, 2023 remains the deadline for old notes to remain in circulation.

He explained that CBN had redesigned, produced, and circulated a new series of N200, N500 and N1,000 notes. Saying that the three notes represent the highest denomination of Nigeria’s eight legal tenders.

Laido urged traders and the general public to make good the remaining periods and take their monies to banks.

“If you don’t have a bank account try and open one for your savings, don’t be stuck with money in your house or shop. If you don’t, take to banks before Jan.31 it will cease to be legal tender.

The acting controller who led the team, along with officials of commercial banks operating in Bauchi assured the traders that they would not be charged any fee irrespective of the amount they deposited in the banks.

He explained that the benefits of the currency redesign to the Nigerian economy were enormous, adding that the policy would help to control inflation and bring the hoarded currency into the banking system.

“It would also help with better design and implementation of monetary policy as the country would have much more accurate data on money supply and monetary aggregate.

“We believe that this exercise would help in increasing financial inclusion, moving towards a more cashless economy and ensuring greater formalization of the Nigerian economy.

“The currency redesign would also assist in the fight against corruption as the exercise would rein in the higher denomination used for corruption, and the movement of such funds from the banking system could be tracked easily,” he said.

According to him, the larger percent of currency in circulation are outside the vaults of commercial banks, with small percent in the Central Bank and commercial banks’ vaults.

Laido advises the public to ensure that they deposit cash holdings in these denominations at their commercial banks.

“There is no limit to how much a customer can deposit between now and January 31, 2023 as the CBN has suspended bank charges”. He said.

The acting Controller urged traders’ payment centers such as eNaira, POS, electronic transfer, internet banking, and mobile money operators and agents among others for their economic activities.

Also Speaking, Director of the National Orientation Agency, NOA,in the state Mr Nura Kobi urged the public to endeavor to adhere to the policy to save their business and the economy of the country.

He said the agency has the responsibility of taking the messages of the new redesign naira notes policy across the 20 local government areas of the state.

“The Agency would take messages to traditional rulers of communities, markets and churches to sensitize,”Kobi said.