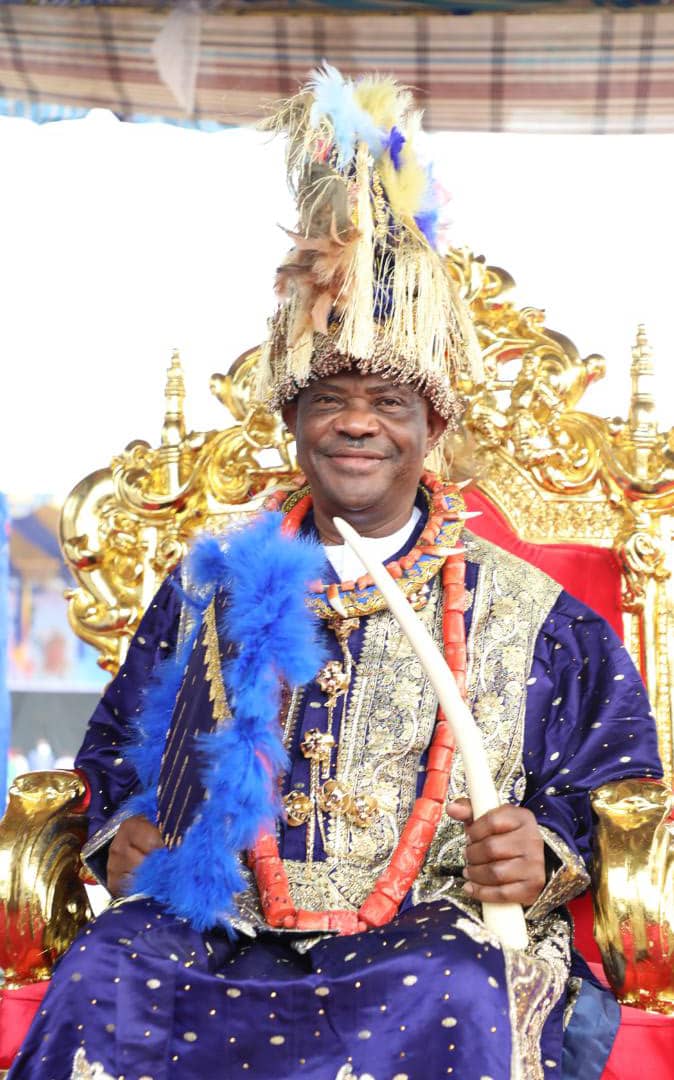 Rivers state governor, Nyesom Ezenwo Wike has said the Peoples Democratic Party (PDP), will not give its presidential ticket to any candidate who will serve only the interest of the wealthy few in Nigeria.

The governor said some desperate politicians are already scheming for a candidate who will not serve the interest of the many, rather the interest of just those of the wealthy few.

Governor Wike made the assertion at a grand reception organised in his honour by the people of Kalabari ethnic nationality at the Abalama School field in Asari Toru Local Government Area on Saturday.

The governor was conferred a traditional title of Se- Ibidokibo of Kalabari land (He who does good things for Kalabari people) and was performed by the Amayanabo of Abonnema, King Gboko Desreal Bob-manuel.

His word: “No amount of gang up can make PDP to give somebody who will want to run election for the interest of some big men, and not for all Nigerians.

He expressed concerns over the fact that some companies in the country continue to post annual financial profits regularly in a downing national economy to the detriment of the poor.

Governor Wike opined that such profits, invariably, shared only by the rich, make them to get richer, while the majority of the population of the country, who are poor, gets poorer

He reiterated that the stakeholders in Southern will soon make a declarative statement concerning 2023 presidential election.

The governor lampooned Rivers politicians serving in the President Muhammadu Buhari’s administration for their gross inability to attract federal government projects to the State.

Concerning the next governorship of Rivers State, Governor Wike said everybody is entitled to aspire to be the next governor, but such person must show capacity for that office and be well disposed to protect the interest of the State.

He told the Kalabari people, specifically, that they’ve have not done well in terms of loving themselves and working in unity.

Governor Wike said it is only a united people who can speak with one voice that can stand up to make demands. He therefore, urged them to put their house in order.

The governor announced the extension of dateline of completion of the Trans Kalabari road phase one project by two months owing to the loss period when workmen were kidnapped on site.

He disclosed that if the finances of the state improves, his administration may award the phase two of the Trans Kalabari road before he leaves office next year.

The governor, while cancelling the contract for the reconstruction of Kalabari National College due to foreseen politics, announce the release of more fund for the Maryhood Girls Secondary school in the area to speed up its completion.

In his welcome address, Chairman of Rivers State Elders Forum, Chief Ferdinand Anabraba explained that the grand reception is significant for two reasons; of its critical importance to them as a people and also because of the unity of purpose engendered among them under the Wike’s administration

He said it is that kind of reception organised for prominent sons and friends who have impacted the Kalabari people.

Chief Anabraba noted that Governor Wike has systematically fulfilled all promises made to them including those of development projects and appointment of Kalabari people into his administration.

He listed some of the projects completed or ongoing to include the phase 1 of Trans -Kalabari Road project other administration promises but failed to execute for over 17 years, the rehabilitation and equipping of zonal and general hospitals, secondary schools, Abonnema Ring road, sandfilling in Obonoma, Abonnema, Bakana and Oboama, Abalama communities.

Also speaking, the former Vice Chancellor of the University of Port Harcourt, Prof. Nimi Briggs opined that Kalabari people have enthusiastically and with relentless vigor, contributed to the growth and development of Rivers State and Nigeria.

It follows therefore, according to him, that it is appropriate, and should be considered right thing for the Kalabari people to expect return for the dues that they had paid.

A human rights activist, Ann Kio-Briggs noted that Rivers State, though a complex place to govern does not mean that the people do not love each other.

She however, harped on greater unity among the people while urging Governor Wike not to relent in what he is doing for the Kalabari people, the State and the region.

BREAKING: Emir Of Jama’are Is Dead