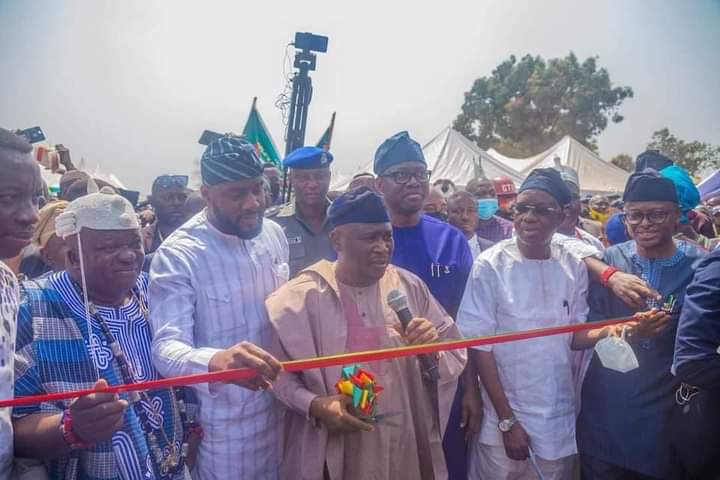 The new 9.7km Saki township road project, constructed by Governor Oluseyi Makinde has been commissioned for public use by the Adamawa State Governor Ahmadu Umaru Fintiri.

Governor Fintiri notes that it was amazing how PDP States are making great impressions on their people.

Speaking while unveiling the Saki township road on Thursday, he said Governor Makinde has transformed his State.

Governor Fintiri expressed satisfaction with the quality of the road project, hoping that the road will boost economic activities in all the adjourning communities.

While describing his host as one who they share many things in common with, from their doggedness, antecedents and even their age and being first timers, he said is a challenge to write their names in gold.

He stated that both of them are passionate about their people and the growth and development of their States.

He said they are both in a hurry to change the fortunes of their people who have been short changed by leaders they trusted.

“I must confess the quantum of projects I have seen in Oyo State, has reinforced my belief in Seyi, increased my respect for him and reassured me, the people of Oyo State and indeed the entire citizens of Nigeria that the right choice at all times is the People’s Democratic Party.”

Governor Fintiri said he is not surprised with the performance of Governor Makinde, because according to him is a PDP tradition and lauded his host for keeping to the tradition of service to the people.

Governor Fintiri who was critical of the All Progressives Congress Government said “PDP is dying and we must not allow our country die with it.”

On his part, Governor Oluseyi Makinde of Oyo State regretted that the Saki road project awarded in 2016 by the last administration in the state was abandoned for three years even after the payment of 30% mobilisation fee to the contractor.

He disclosed that his administration had to revoke the contract and deliver in 15 Months saving Government one billion naira tax payers money.

Governor Makinde said he will not play politics with the development of the State, but will ensure the people get value for their money.

The Oyo State Governor noted that his administration is diversifying the economy of the State and the provision of good roads network was deliberate to pave way for that to happen.

Both Legislators are hopeful of a new Nigeria with the calibre of leadership being provided by Governor Ahmadu Umaru Fintiri and Governor Oluseyi Makinde, promising to continue their support to the Fintiri administration towards changing narratives in Adamawa.