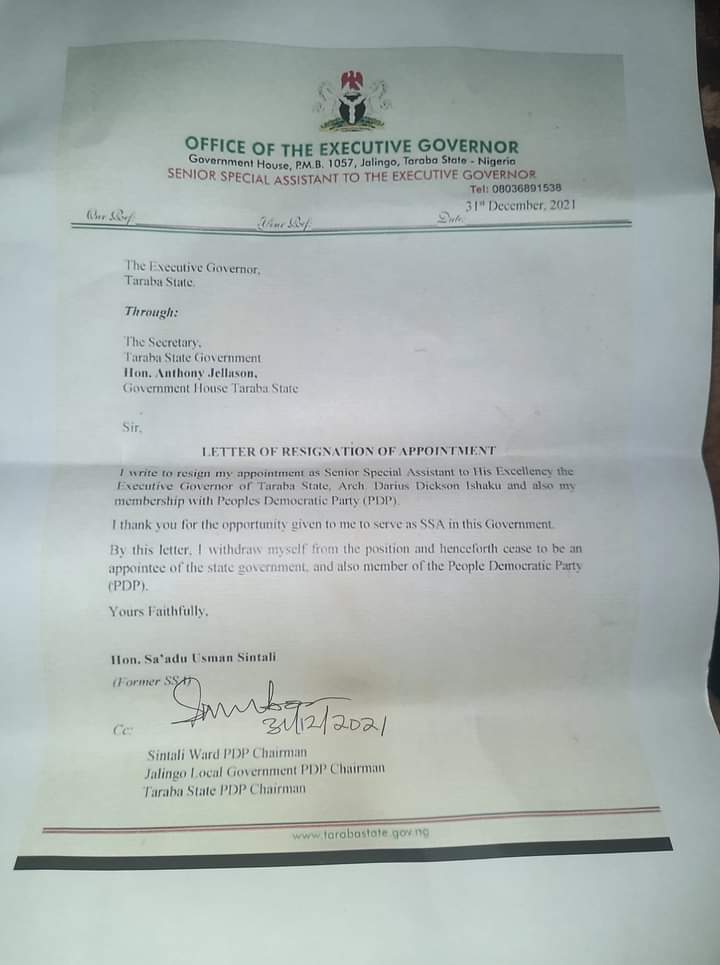 The Senior Special Adviser to Governor Darius Ishaku of Taraba State, Hon. Sa’adu Usman Sambo debunked the press statement issued by the Taraba State Government that he was sacked of his appointment.

In a statement he signed and made available to journalists in Jalingo, Sambo said he voluntarily resigned but not sacked as stated by the Special Adviser to the Governor on Media and Publicity, Bala Dan Abu on Wednesday 5 January 2022.

The statement reads: “I Hon Sa’adu Usman Sambo on Wednesday rejected the press statement issued in Jalingo by the senior special adviser on Media and Publicity to governor Darius Ishaku, Mr. Bala Dan Abu that i was sacked from office.

“On the 31/12/2021, I wrote to the governor through the Secretary to the State Government, Hon. Anthony Jallason that I have resigned of my appointment as his SSA.

“After written to governor Ishaku through the SSG, I proceeded to My ward Chairman in Sintali ward and informed him that I am quiting the People’s Democratic Party (PDP) for My former party, the All Progressive Congress (Apc).

“I joined the PDP in Taraba because of late Sen. Aisha Jummai Alhassan who was in 2015 victimized by the party at the national level.
May her gentle soul rest in Peace Ameen.

“As you can see, there was no single reason spelt out for the sack” the statement closed.

Adamawa Govt Is Set To Reconnect Hildi To National Grid