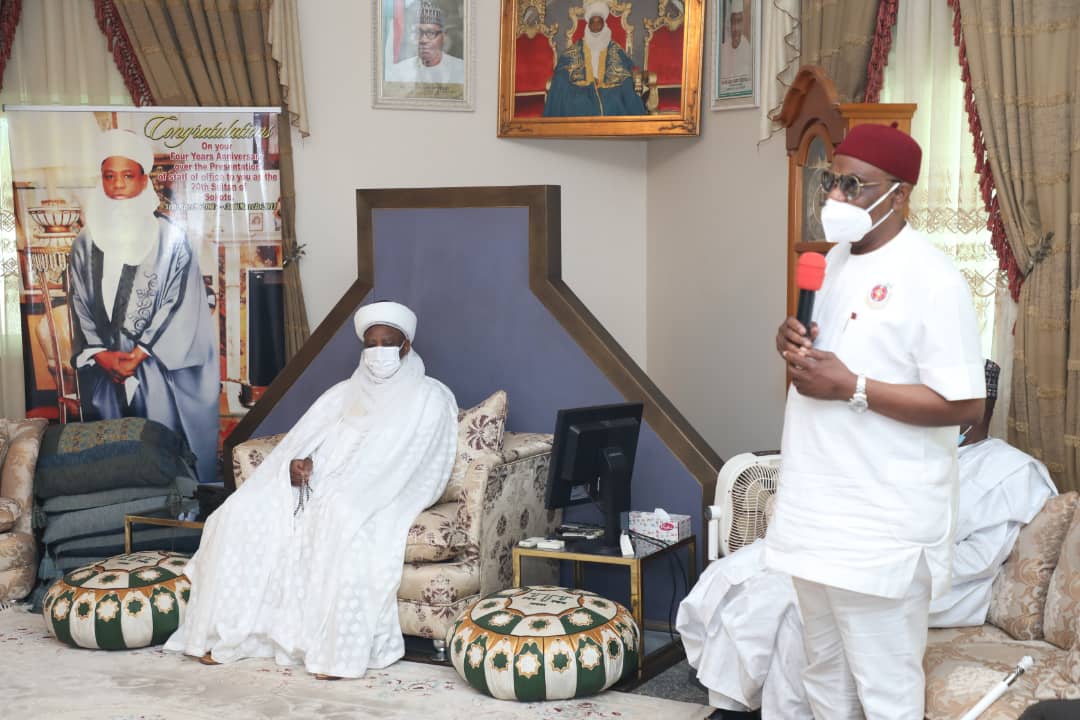 Governor of Rivers State, Nyesom Ezenwo Wike has deplored bandits attack in Sokoto State and commiserated with the government and the Sultan over the unwarranted killing of innocent citizens by bandits.

The governor, who condemned the recent spate of killings in Sokoto, said the government and people of Rivers State consider the dastardly activities of marauding bandits as barbaric.

Governor Wike in a statement by his Media Aide Mr Kelvin Ebiri stated this when he and the Sokoto State governor, Rt. Hon. Aminu Waziri Tambuwal, paid a courtesy call on His eminence, Alhaji Muhammad Sa’ad Abubakar, Sultan of Sokoto in his palace in Sokoto over the weekend.

The Rivers State governor expressed dismay over the wanton killing of innocent citizens by bandits in Sokoto and other parts of the country.

“We have had a long standing relationship and so the people of Rivers State have told me to commiserate with you and people of Sokoto State. I’m sorry for what happened and we believe God will give the families that have lost their loved ones the courage, give them the strength to bear this unnecessary lost of lives.”

The governor, who was accompanied by a delegation of Rivers’ elders, also thanked the Sultan for the role he has been playing to ensure the stability of the country

“This character in you is rare. If all leaders can exhibit this kind of trait, then we will have future, then we can know that this our country is going somewhere. You’re exhibiting the character that is expected of leadership.

Governor Wike urged the Sultan not to relent to speak for the oppressed, the less privileged, the poor and rich Nigerians.

In his response, His eminence, Alhaji Muhammad Sa’ad Abubakar, Sultan of Sokoto, thanked Governor Wike and the Rivers’ delegation for the brotherly visit.

The Sultan blamed lack of love for the prevalence of killings, confusion and acrimonious relationship among Nigerians.

“If there is love, all the acrimonious we hear, all the confusion all over the place , the killings won’t have taken place. People kill without any motive. Blood thirsty people kill anyhow because there is no love, and there is no godliness.”

The Sultan assured that he will continue to build bridges and cementing relationship between the peoples of Sokoto and Rivers States.

“Whatever we have done , it is what our forefathers and religion ordered us to do, and we will do more to strengthen our relationship, so that we can have a peaceful society.

He commended Governor Wike for his consistent visit to him, particularly during festive period and for supporting the government and people of Sokoto State.