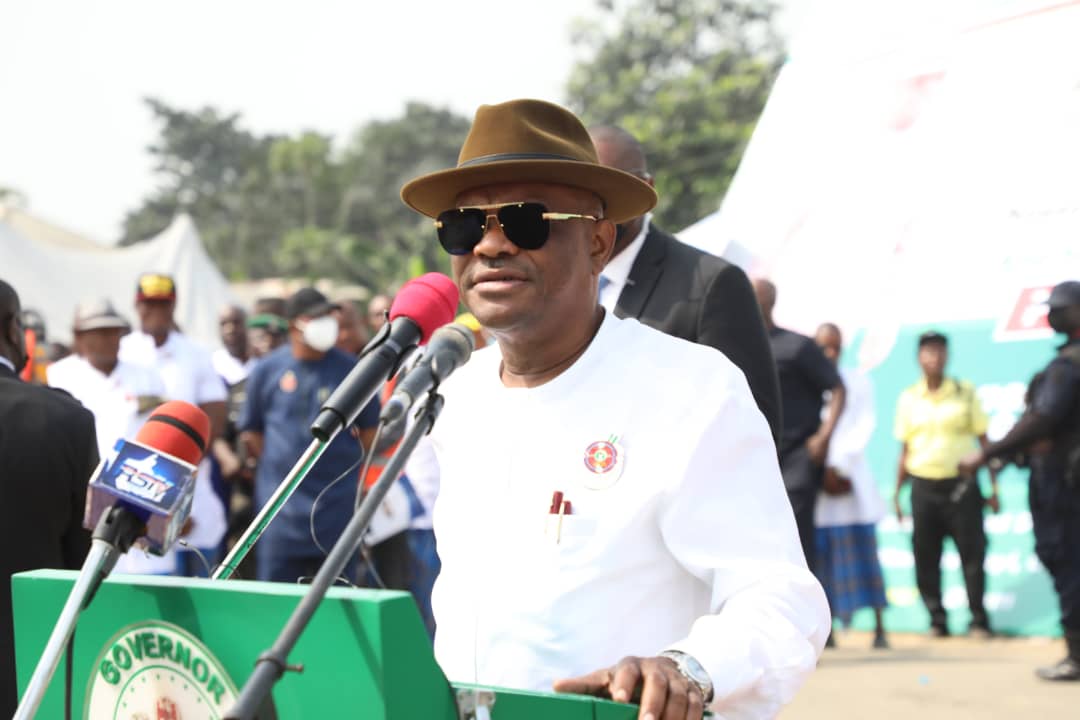 Governor of Rivers State, Nyesom Ezenwo Wike has explained concerned stakeholders fought for the change of the immediate past national leadership of the Peoples Democratic Party (PDP) because they wanted to reposition the party to win the presidency in 2023.

He maintained that such change of leadership at the national level was also to avert a situation of doom for the party.

Speaking at the flag-off of the Oyigbo -Okoloma Road in Oyigbo Local Government Area on Wednesday, performed by the national Chairman of PDP, Dr. Iyorchia Ayu, Governor Wike asserted that the party now has good leadership in place to rescue Nigeria from the All Progressives Congress bad governance.

He therefore urged the National Chairman of PDP, Dr. Iyorchia Ayu to brace up to the task ahead of him and capitalise on the opportunity he has to effect positive change in the party and return PDP back to the presidency.

The governor I a statement by his Media Aide Mr Kelvin Ebiri declared that Rivers people have no other party than the PDP, which is why they will not allow it to die. According to him, Rivers is among few States in the country that denied the All Progressives Congress (APC) a 25 percent of vote spread during the 2015 and 2019 general elections.

On the issue of his successor, the governor told party faithful currently doing consultations over who becomes the next governor of Rivers State, not to extend the consultation to the PDP national chairman or the National Working Committee of the PDP.

Speaking about the Oyigbo -Okoloma road project, Governor Wike said it is a federal road that connects neighbouring States like Abia, Akwa-Ibom and Cross River, but was allowed to fail completely.

He disclosed that a company that won the bid for Afam power station came by to indicate interest to partner with the Rivers State government for the reconstruction of the road. According to him, after it was agreed that the company will bear a percentage of the cost, they disappeared.

Governor Wike said Rivers people have taken their destiny in their hands and with 40 percent paid already to the contractor, Lubrik Construction company, the road will be done to end the sufferings of the Oyigbo people and those who use the road.

The National Chairman of PDP, Dr. Iyorchia Ayu commended Governor Wike and PDP governors for spreading development to every nook and crannies of their states.

He said while the APC controlled government is busy borrowing money from foreign creditors and increasing the debt burden on Nigeria, PDP Governors are visible and delivering dividend of democracy.

Dr. Ayu berated APC governors, particularly, one of them who he said has abandoned his governorship responsibilities in his State to reside in Abuja to do party chairmanship job. Worst still, he said another one hid 19billion Naira in the bank instead of providing development to his people.

“I’m not only proud of the governor of Rivers, I’m proud of PDP governors. Every PDP governor with the resources base of the state have been trying very hard to make sure that the people get the dividends of democracy.”

“The other party, the governors take power as a joke. How on earth can a governor leave his state and become a party chairman and live in Abuja without making any effort to develop his state. I believe such action does not take into recognition the people who laboured to elect such a governor.

“How can a governor of a State take N19 billion and go and hide in a bank account, in a state where he has not paid salaries. He has not been able to do any positive development by ways of hospital, road construction or anything. No PDP governor has hidden N19 billion in his account, the little they get, they are busy making effort to develop their areas.”

Dr. Ayu also said that his leadership will ensure that they increase the number of states controlled by the PDP, produce majority membership of the National Assembly and clinch the presidency in 2023.

“The Peoples Democratic Party is prepared to expand its base not only in control of states, but in control of the National Assembly and ultimately also the return to the villa in Abuja where we shall put a president of PDP extraction.”

The national chairman assured party faithful that the PDP under his watch will allow internal democracy to flourish. He declared that only names of candidates who emerge through a democratic process will be forwarded to the Independent National Electoral Commission, INEC.

“We believe that the will of the people must prevail. Any state that democratically elect anybody and the list is forwarded to us, it is that list that will go to INEC. Nobody’s list is going to be altered. Anybody in party’s headquarters who attempts that and it comes to our knowledge as National Working Committee, you will leave party headquarters.”

Rivers State Commissioner for Works, Elloka Tasie-Amadi said the Oyigbo-Okoloma Road project is 19.4km long, 10.3m wide, has 24km of drains and will be completed in 12months.

According to him, it will undoubtedly save the people a lot of money spent in repairs of their vehicle as results of hastened wear and tear and promote socioeconomic opportunities in the area.