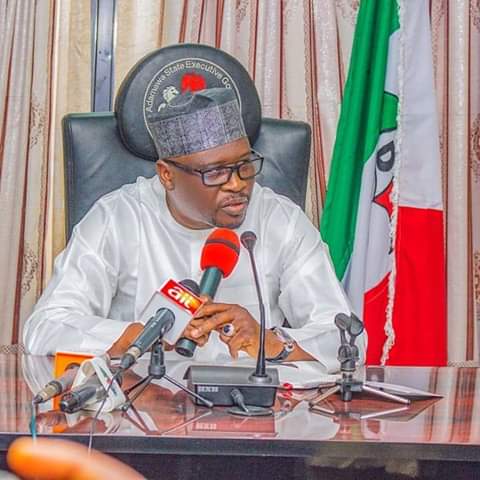 The administration of Alhaji Ahamdu Umaru Finitiri came on board with a mind set to give the state capital a new look that can be compared with other developed cities in the world.

It came up with a program call Urban Renewal projects, these projects includes the rehabilitation of delapitated roads and other infrastructure and construction of new ones.

The contract award to Msser Triacta Nigeria Limited in August, 2020 with a delivery date of 18 months for both projects.

Managing Director/CEO of Triacta Nigeria Limited, Mr. Elie Farhat While signing the contract agreement said,his company will deliver on or before the agreed date if all the parties involved lived up to their side of agreement.

Fifteen months down the line, the project many seems like a project that will be a mirage has come to reality.

Motorist who spoke with our correspondent did not hide their feelings of joy and praise to the governor and the company, Triacta Nigeria Limited for not just keeping to the promise but also delivering quality job.

Mr. Michael Godwin a public servant said “I am very happy to be part of this beauty that is now with us, never have I imagine we will have such in ADAMAWA but today Yola is now in the league of beautiful city in the world”

Adamu Faratua, a business man who travels outside the country for his business said ” I am proud to be from this state Adamawa, I have only see this kind of interchange in Dubai but today we now have it, my prayers is that it should be mentained. It has given the state capital a modern value he said.

Our correspondent reports that a lot of residents spoken to on their thought over the interchange and the first flyover in the Northeast expressed joy over the new look state capital though,there were few decending vioces who felt the money spent on the project should have been used to build industry.

Ego Michel, a resident of Yola town said ” the interchange and flyover projects are misplaced priority, we have thousand of young graduates roaming the streets, instead of empowering these youths, the governor is building Projects that can not be maintained”

Speaking on the project that is over 95% completed, the Commissioner for Works and Energy Development, Alhaji Adamu Atiku Abubakar, who spoke through the Parmanent Secretary of the ministry said the project is a dream come true for the governor who made a promise to change the face of the state capital so as to conform with what is obtainable in the developed cities across world.

“Our mandate as a ministry is to ensure that standards are met and mentained, the commissioner added that when we were given this task, we were sceptical but when the company Triacta Nigeria Limited who won the bid told us they are ready and promised to deliver on or before the agreed date and Haven seen what they have on ground we became a little relaxed”.

“What we did was to approach the state House of Assembly to approve 40% upfront payment as against the 30% normal payment, this really helped because with this money in their account,the company was able to but materials needed in large quantity and that is why we do not have much viration in the contract sum despite the economic challenges”.

Alhaji Adamu Atiku Abubakar further said the successes recorded within the agreed time came with a lot of challenges, according to him ” we had to contend with traffic flow but with adquate enlightenment by Road Safety Corps, the Police and VIOs were able to address it”.

One of the biggest challenge we had was paying compensation and the frigrant abuse of developmental plans of the state, people build on roads, waterway and unauthorized places and even power supply agngcy and network service providers erect their poles on areas that were meant for development.

Project Manager of Triacta Nigeria Limited, Engr. Hassan Ghanem told our correspondent that the state government commitment was one of the reasons the job was completed in record time.

“We have track records that we always try to maintain and I am happy we were able to deliver,the entire team worked hard to achieve this feet”

” I must commend the efforts of the state government for keeping to their own side of the deal, like we promised, we are going to deliver on or before the agreed date, we are over 95% gone in the interchange,I assure you as soon as we resume next year we complete the job and deliver to the state government “.

Commissioner Of Works and Energy Development.

Abba Tahir To Be Turbaned As KaaKaaKey Adamawa January 1, 2022