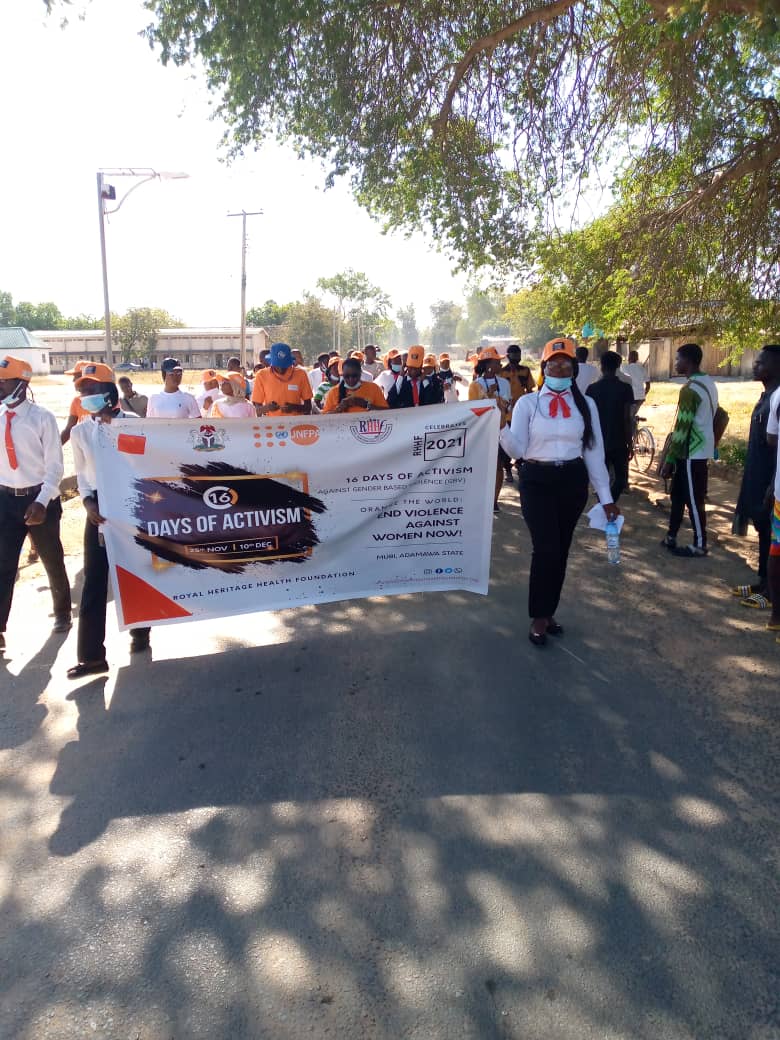 Mr Elijah Sogunro, the Coordinator of the NGO, led the campaign awareness as part of commemoration of
16-day of activism against GBV held on Tuesday in Mubi.

Sogunro commended Adamawa Government for enacting law on Violence against Persons Prohibition (VAPP) in the state.

He said that the programme was with technical support from UN Population Fund (UNFPA).

He explained that the core objective of the campaign was to educate people at the grassroots and communities to end the ugly act of gender based violence, especially, on women and girls.

He noted that the Violence against Persons Prohibition (VAPP) law would go a long way in bringing an end of violence against women and girls in the state.

According to the coordinator, the theme of this year campaign awareness is: End Violence Against Women and Girls Now.’’

He said that the foundation team met with community ward heads from Mubi North and Mubi South, with the intention to sensitise them to end GBV in their respective domains.

“The sensitisation is aim to educate community leaders on the danger of GBV and to find a lasting solutions to end the ugly act.

“Also, to educate them on how to prevent GBV as a means to end Violence Against Women and Girls (VAWG) and the penalties in the enacted law.

“Equally, the VAPP Law enacted by the state government is a milestone in the fight against menace of gender based violence in the state”. Songuro said.

He said that the advocacy campaign include marching, town hall meetings, Symposium and cross fertilisation of ideas between various related gender based Civil Society Organisations.

In his address, Abdullahi Buba, representative of Mubi town village Head, expressed happiness with the activity of the foundation and promised maximum support and cooperation of traditional rulers to end the violence.

“I m going to mobilise all my Ward Heads to join hands with the foundation to bring an end to GBV and to ensure the perpetrators are brought to the book,’’ Buba said.

In his remarks, Rev. Nathaniel Bare, the CAN Chairman, Mubi South, said that the campaign came at a right time when the community were experiencing and suffering from GBV challenges.

Bare said that the religious body would collaborate with the foundation to sensitise their followers about the danger of the menace.

“Now that you have sensitised us and with this knowledge you impacted on us. I believe it will help us as community to sanitise the community and make it difficult to the perpetrators to breathe fresh air,’’ Bare said.

Umar said that Islam had prohibited any form of violence against women and that the council would not rest until all forms of GBV were eradicated.

“The council has already established a committee to work hand in hand with similar NGOs to tackle and bring to an end GBV in Mubi,’’ Umar said.

He said that the council had gained a lot from the foundation’s campaign and that it would implement some key points to add value in its committee’s activities to end GBV.

Also, Madam Saude Kasimu, the Coordinator, Mubi Zone Development Foundation, said that a part of the organisation’s mandate and objective was to protect and support Widows and orphans.

“We are ever ready as organisation to partner with the Foundation to fight against GBV, especially, on women and children.

“We are going to redouble our efforts to end early marriage and teenage pregnancy in our communities as well as to ensure girl child gets proper education and equal opportunity in the society.

“From today, we are going to report any GBV, especially, those that affected women and girls to appropriate authority,’’ Kasimu said.

On their parts, Mrs Lydia Daniel and Laraba Lawan, representatives of Zumuntan Mata and Adamawa Northern Senatorial Youths Development Association, respectively, said that the era of keeping silent concerning VAWG issues was over.

“We thank the Foundation for organising such important campaign. GBV on women and girls for long time is among the major issue of concern in this part of the country.

“Now that the state government has signed into law the VAPP Act. We are going to sensitise our members to make use of the law to dealt with all perpetrators,’’ the duo said.

It’s reports that more than 20 different Women and CSOs participated in the campaign awareness.