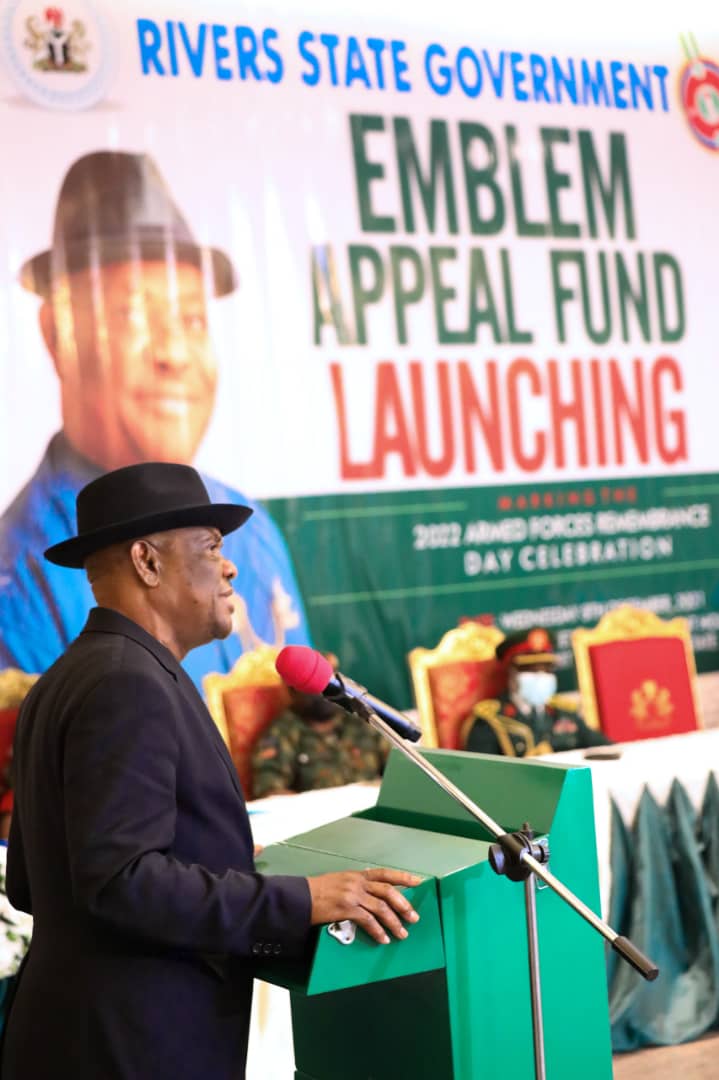 Governor of Rivers State, Nyesom Ezenwo Wike has stressed the need for the Federal Government not to abandon its responsibility of catering to the welfare of men and officers of the security agencies to the States.

He assured that his administration will not relent in its support to men and officers of the Nigerian military who have fought tirelessly in keeping the country united at great cost of their life.

Governor Wike in a statement by his Media Aide Mr Kelvin Ebiri noted that though January 15th every year is the Remembrance Day in particular, the Emblem Appeal Fund Launch is organised earlier to raise money to support the Nigerian Legionnaires.

“What we are merely doing is to support. What is the federal government doing for you? So, everything should not be left in the hands of the State.”

Governor Wike, in reaction to the request for the provision of secretariat for the Nigerian legion, wondered what the leadership of the legion does with the monetary supports that they receive each year.

According to him, it remains puzzling that the legionnaires in the State are unable to provide some basic operational facility like a secretariat for themselves.

The governor said the Rivers State Government alone, within the last six year of his tenure has donated not less than N150 million to them annually, and if the resources was well managed, would have provided them a secretariat without going hand-in-cap to government.

“If you check for the six years, I’ve launched this emblem with not less than N20 million in every year. And check each January 15th, I have given you not less than N150million. So, when you calculate, you can have your own secretariat.”

The governor urged the federal government not to abdicate its responsibility to fend for security agencies to the States.

In his welcome speech, the Secretary to the Rivers State Government, Dr. Tammy Danagogo said every year, this event is organised to honour, appreciate and support war veterans and their dependents for their various levels of sacrifice that they made as a duty to the nation.

He noted that as officers and men of the military, they gave their best to ensure that the civil populace continue to enjoy security and peace.

Dr. Danagogo stated that while Governor Wike and the Rivers State Government have continued to support and providing to the welfare of the legion, it is also important that well-meaning individuals and corporate bodies also lean their support.

“We may not know them all but certainly, we owe them all. That is why, His Excellency, the Governor of Rivers State has always supported them in every way possible.

“But whilst he is always supporting them and doing everything possible for them, it is not enough that only government or the governor is supporting them. It is a responsibility and duty for each and every one of us to appreciate them and to support them.”

According to him, these war veterans, some have been living with hurts and others have died while fighting to keep the flag of freedom flying.

He urged Nigerians to spend the 2022 Armed Forces Remembrance Day celebration in sober reflection of those sacrifices and renew commitment to the welfare of the veterans, widows and dependents of the fallen heroes in Rivers State.

“Your Excellency sir, after an in-depth arithmetics of the immeasurable supports which we are enjoying of your administration as the Governor of Rivers State and our patron, I am led to, with humility and respect, that, I know of no one who has contributed more than you to the welfare of the legionnaires.

“The gift of giving for the welfare support of the needy has earn you the admiration of everyone.”

The Rivers State Government launched the emblem with the sum of N20m, the 23 council chairmen collectively launched it with N23 million, while the State legislature and judiciary did same with N2 million respectively.