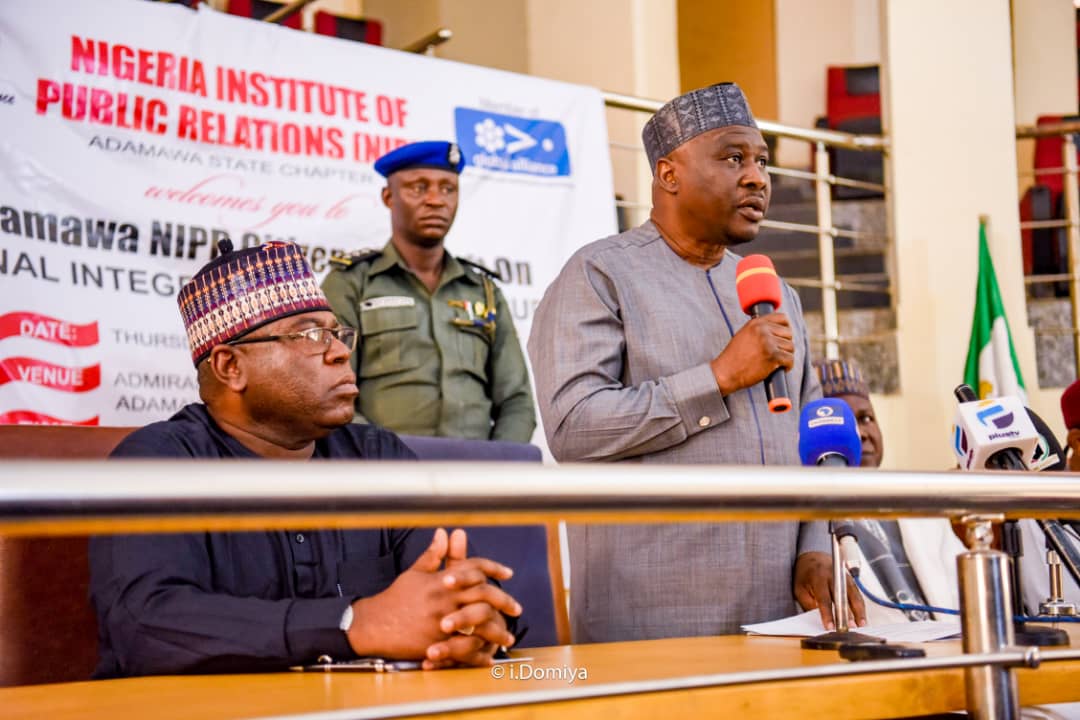 Worried by the current challenges bedevilling the country, Adamawa government reiterates support to efforts of organizations like the Nigeria Institute of Public Relations NIPR to combating the menace of insecurity and lack of cohesion.

He said the present administration has redoubled efforts towards addressing the demanding challenge within the State stressing that lack of cohesion and integration constitutes a major threat to peace and security.

Governor Fintiri appreciates the security agencies for their support in addressing pressing problems and threats, observing that the reign of crime anywhere in the world is an assault on the collective humanity.

He further said government stands ready to continue to engage the best practice in tackling insecurity and marginalization, which are responsible for most cases of communal conflicts that will guarantee peace.

“Our State and Country continue to be confronted by pressing problems and threats. No statement that will be made during this Summit can exhaust the extent of these problems.

“The people look up to us, as leaders, to provide hope amid crisis, to provide guidance through complex socio-political divisions, and to ensure that we live in a better world.

“We have obligations to the present generation. Still, we have a more outstanding obligation to generations yet unborn who should one day inherit Adamawa state of sufficiency irrespective of the circumstances of their birth or where they reside.

He noted that in recent years, Adamawa has had its share of conflicts, notably in Numan, Lamurde, Guyuk and Song adding that his administration’s commitment to sustainable peace and security will propel our much needed economic and infrastructural development.

The Coordinator Adamawa NIPR summit Muhammad Inuwa Basi said the situation in the country has deteriorated so much that even within families and communities, trust is fast becoming a scarce commodity.

The State Chairman of NIPR, Alhaji Ahmad Usman Dada said the forum is a response to the directive of the national Secretariat of the organisation that each state hold its chapter summit.

The Chairman of the occasion, who is the managing director of Gotel Communications Yola, Muhammad El-Yakub noted that the summit will touch the lives of the people of Adamawa in so many ways.

Earlier, State Chairman Organising Committee of the summit, Professor Abubakar Abba Tahir observed with concern the challenges of banditry, kidnapping, secessionist agitations among others in the country.

Sahel correspondent reports that participants at the summit are expected to deliberate on national cohesson, peace and stability, by building trust as a foundation for Nigerias rebirth.

CIBN Seeks Support For Amendment Of Act No 5