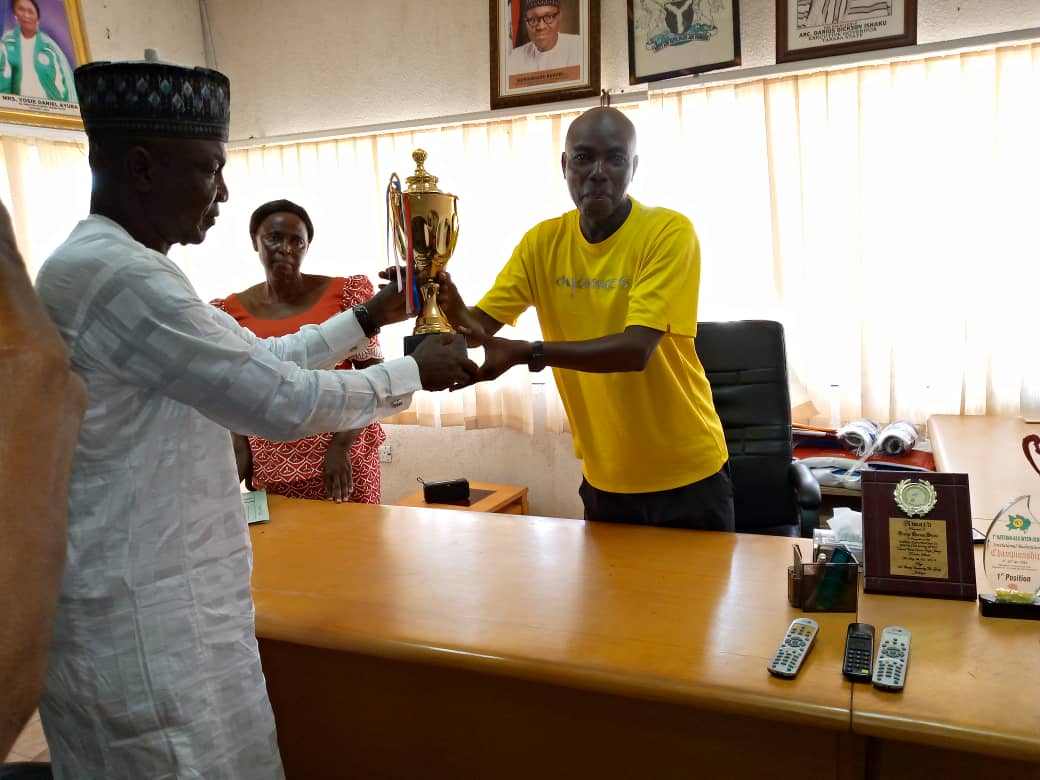 An advocator of peace in Taraba State, Hon. El-Kabir D. Muhammed from Takum local government area of the state has donated 3 Trophies to the Taraba State Sports Council aimed at to organize a football competition in the Southern Taraba Senatorial District.

Speaking during the presentation, the Philanthropist said he finds it necessary to contribute his quoter toward rallying round to ensure that the state continues enjoying the relatively peaceful coexistence as established by Governor Darius Ishaku’s led administration.

“Haven being close to the Governor and as all of you know, the Governor is a man of peace and sports is peace, I find it very necessary to contribute these just because of the recent occurrence in Takum. Two days back, the youths of Takum got up the track by fighting each other and I think twice about it, what will bring them closer is the same sports.

“As we all know the slogan of Arc. Darius Dickson Ishaku is ‘give me peace and I will give you Development’, that was what really facilitated me to donate these trophies to the sports council” Muhammed emphasized.

According to him, while interacting with the Director of the Sports Council coincidentally, he noticed that they shared the same ideology about the youth, and his words of encouragement also boosted his morality, believing that the encouragement he got from the Director will also encourage the entire youths of Taraba state.

As a loyalist of Governor Ishaku, Hon. El-Kabir Muhammed who is also a politician further urged other loyalists to always remember what the governor taught them by refraining from reacting to any kind of humiliation by the enemies of peace in the state.

Commenting on the gesture, the Chairman of Sports Writers Association of Nigeria, Taraba State Chapter, Mr. Joachim Dangana appreciated Hon. El-Kabir Dio Muhammed for the donation and stressed the need for the individuals as well as cooperate organizations to join forces in sports development as government cannot do it alone.

Delighted over the development, the Director of Taraba State Sports Council, Coach George Shitta said “This is things we have been calling for, and I’m happy to see Tarabans yielding to our cry. Today we have here, trophies been donated to the sports council to enable us to organize the football tournament in honor of His Excellency, Arc. Darius Ishaku.

According to Shitta, Governor Darius Ishaku after appointing him as the substantive Director of the sports council, the governor has made his job easier by granting approvals to the council especially for the just concluded 6th National Youth Games held in Illorin, the capital city of Kwara where the state had its first Gold Medal in team sports since the creation of the state in 1991.

“I think our outing to the 6th National Youth Games, we equally did not disappoint the state for winning the Gold medal, and I think His Excellency Governor Darius Ishaku too will be proud to hear that because this was achieved during his tenure and it was achieved because he gave us an enabling environment.” Shitta expressed optimism.

The Director, while appreciating the gesture done by Hon. El-Kabir Muhammed disclosed that the council will use the trophies to test run and see before the end of this year how they can come up with a tournament that will engage the whole 16 local government areas of the state to be tagged “DDI Taraba State Football Tournament”.

Shitta further revealed that before the end of the year, the council would fix a date to host and organize the tournament in Wukari and Takum LGAs, adding that they will also go out and look for more sponsors for the event, while he promised that the sports council will support the donor with Medals for all winners of the tournament.