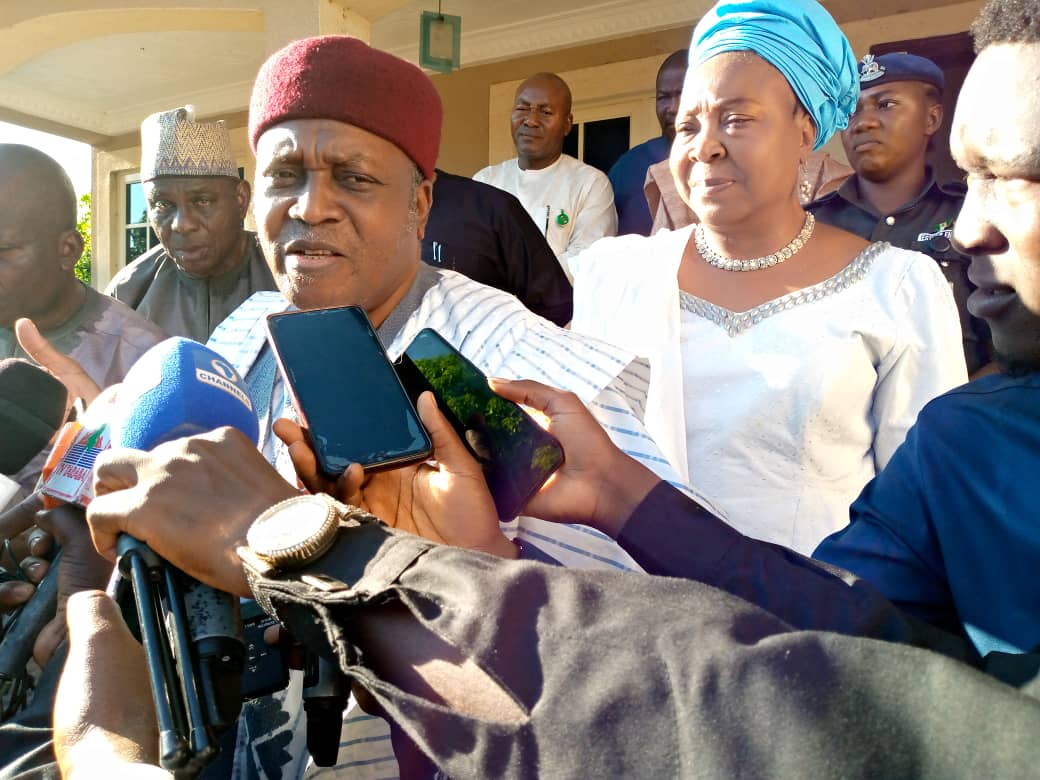 As the 2023 General elections us around the corner, political activities have started manifesting in different forms as different political groups are beginning to drum support for the preferred politicians vying for various political offices.

Governor Darius Ishaku of State is one politician in the entire North East region who has started enjoying these political privileges as different political groups have endorsed him as their preferred candidate for the Senatorial position in the Southern Taraba Senatorial zone for the 2023 general election.

The Governor, while reacting to the calls by many political groups who came out in their numbers to welcome him when he went for the burial of his Uncle in Donga Local Government Area of the state said he has seen his pictures on billboards as his people are urging him to contest for the seat of Senate in 2023 as earlier observed by Journalists.

“I have come here to bury my Uncle Mr. Bako Bobzom and there was a mammoth crowd who welcomed me in Takum and Donga. I have seen many posters with my pictures on them as my people are calling me to contest for Senatorial seat in southern zone in 2023, while I am here I also learned that another group in Jalingo went to the PDP Secretariat to do the same thing, but I will think about their demands to see if I will continue to render my services to the good people of Taraba State”. Ishaku promised.

Also, a leader of a political group known as DDI Support Group, Mr. Ibrahim Samuel who spoke to our correspondent said they were drumming support for the Governor to contest for the senatorial seat because he has brought development in various parts of the state as a governor, believing that he will do more as a senator for the southern zone.

“We have seen how Governor Darius Dickson Ishaku is changing the face of Taraba especially in the areas of education, water supply, and Agriculture and if he could do this as governor of 16 local government areas in Taraba state, then we believe that when he becomes a senator controlling only 5 local government areas in southern senatorial zone, more development will come to the zone, that is why we are calling on him to contest for the seat of Senate in the 2023 general election”. He revealed.

Also, Governor Ishaku while commenting on the recent award of “Best Performing Governor of the Year” given to him by the Nigerian Institute of Architects, Ishaku said the award is one of his best achievements as a governor as it came from his colleagues “Architectures”.

“Receiving the award of the best performing Governor of the year from my colleagues in the Nigerian Institute of Architects is the best award I have ever received, this is because the people who gave me the award were able to itemize in detail what I have been able to achieve in the state as a governor, how they got this detail is a surprise to me. To affirm it, they mentioned how the Taraba State University has been able to grow from being the 170 Universities to the 20 best Universities in Nigeria, this award will spore me to do more in the state”. He reaffirmed.

Governor Darius Ishaku who is also a fellow of the Nigerian Institute of Architects was elected governor of Taraba State in 2019 for the second term and his tenure will end in 2023, hence the calls by his people for him to contest for the Senatorial position in the southern Taraba zone where he hails from.

Among the governor’s entourage and his wife, Barr. Ana Darius was the SSG, Mr. Anthony Jallason, Chief of Staff Government House, some Commissioners including that for Information and Reorientation, Hon. Danjuma Adamu, SA’s, SSA’s, local government council chairmen of Takum and Donga, PDP local government chairmen of the two LGAs, the MD, Taraba Investment Limited, Mr. Iliya Eziekiel among many others.

Our Correspondent further reports that the governor alongside his wife were received by a mammoth crowd in both Takum and Donga LGAs including all Traditional Rulers in the areas which some political analysts interpreted as a sign of acceptability to his people and he could win the seat of the Senate come 2023 in Southern Taraba.

State Assembly Speakers Disturbed By Trend Of Insecurity In Nigeria