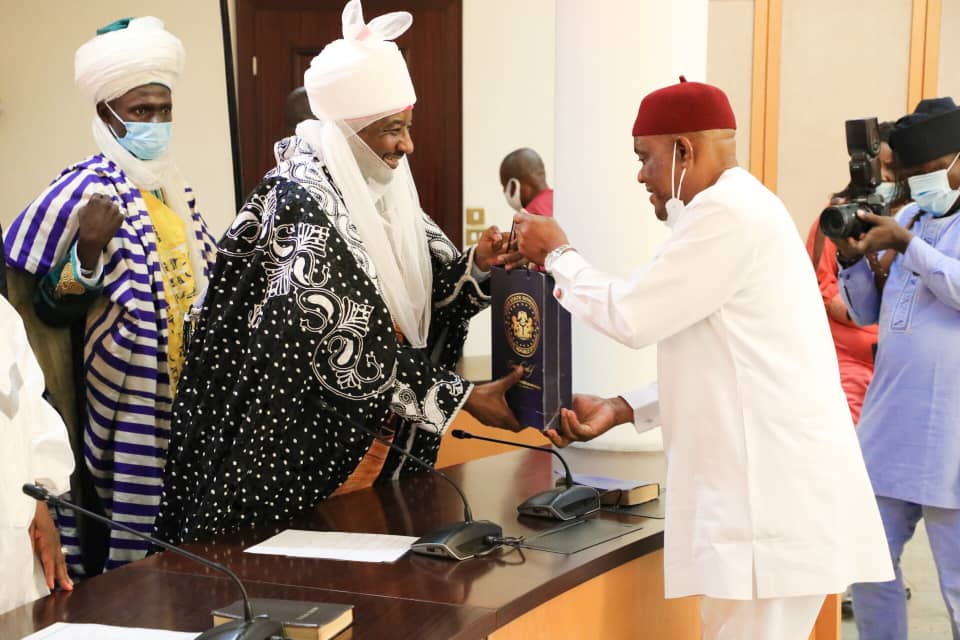 Governor of Rivers State, Nyesom Ezenwo Wike has urged Nigerians to work together to salvage the country from current political and socio-economic woes.

The Governor in a statement by his Media Aide Mr Kelvin Ebiri pointed out that development can only be secured in a society that promote good governance that is predicated on the rule of law.

Governor Wike made the assertion when he hosted on courtesy visit the former Emir of Kano and Grand Khaleefa of the Tijaniyyan Order in Nigeria, His Royal Highness, Muhammad Sanusi II, at Government House, Port Harcourt on Sunday.

According to Governor Wike, the country’s economy is not doing well and everyday Nigerians also wake up to the tails of bad news that have exerted excruciating pains on them.

Governor Wike maintained that everybody can attest to the fact that things are not well in Nigeria and it does not matter how pretenders try to exonerate themselves from the happenings.

Speaking further, Governor Wike reiterated that Rivers State will continue to be a place where every Nigerian can reside and consider as home. But, he insisted that it is also obligatory on all residents in the State to conduct their affairs within the confines of the law and be orderly.

The governor said it is the place of government to provide development for its people and ensure safety of all residents. But also noted it is wrong for some residents to view government’s development policy and efforts to provide security from the prism of religion or ethnicity.

“The only thing I have always crave for is law and order. For people to understand that no society can progress without behaving orderly, without obeying the law. When you have a lawless society with no security, you can imagine the kind of state it’ll be.”

Governor Wike enjoined the former Emir to advice his followers in the State to obey the law and live orderly.

The governor explained that the relocation of the former Oginiba Slaughter Market in Trans-Amadi Industrial Area, was a measure taken to curb the level of criminality in the area.

He said it is rather unfortunate that instead of people accepting the genuine efforts of government to create a peaceful state for everybody, they see it as measure of hatred against them.

“But as a state, you also owe that duty to protect your citizens, protect the business people , protect the property. So, when we took that decision, the next thing was that, he is demolishing where Fulanis and Hausas are. And I said, what type of country we are.

“How can we live under this kind of situation. You take a decision that is for the interest of everybody, they said its because I don’t like them. So, if I don’t like them, why have I not closed the other slaughters.”

Governor Wike also stated that the construction of the Nkpolu -Oroworukwo flyover in Port Harcourt has nothing to do with tribe or religion, but to further the development agenda of the State and provide safety for all residents.

“We are trying to put our State in such manner that people doing business or who live in the state will have that sense of protection.”

Stating his reasons for the courtesy call, the former Emir of Kano, His Royal Highness, Muhammad Sanusi II said he was on familiarisation tour to leaders and members of Tjjaniyya Order who are resident in Rivers State because he is their Grand Khaleefa.

He noted with delight the quality of leadership demonstrated by Governor Wike in making Rivers State home for all Nigerians.

He also acknowledged the quality of public infrastructure, the development strides and security provided for all residents by the Wike’s administration.

“This is part of the familiarisation tour to meet with the leaders and members of the order here in Port Harcourt. I will like to thank your excellency, they have informed me of the support they have received and we have watched closely the efforts of his excellency to make Rivers a home for all Nigerians. To make all Nigerians feel they’re true citizens of this country and to protect life and property and the freedom of persons.”

He assured the governor that the Order does not tolerate extremism, but advocates peace, brotherhood, togetherness, solidarity and progress of the country.

“I would like to assure you that this order is a Sufi Order, it is a peaceful order. We do not have among us any extremist. We do not encourage any kind of criminal activity. We advocate peace, brotherhood, togetherness, solidarity. Our interest would be the progress of this country. But we are committed as a group to play our role in supporting leadership that will bring development to the Nigerian people because we are convinced that if the leadership of the country and the sub-nationals is not up to speed, all of us suffer. If we have good leaders, all Nigerians benefit.”