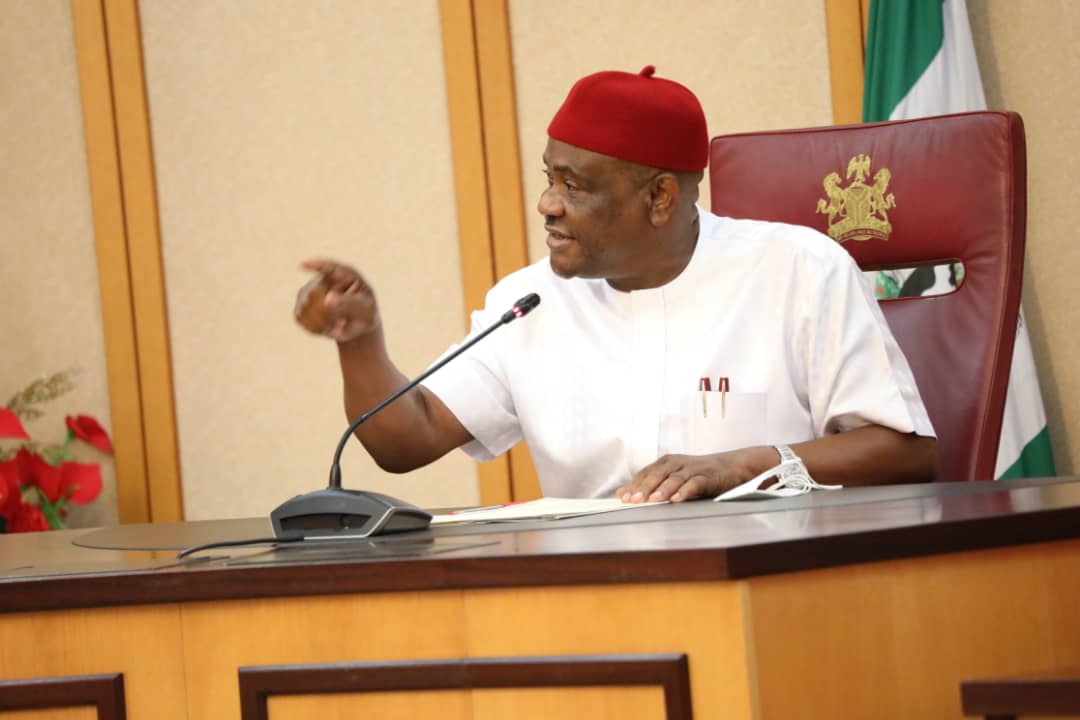 He has also stressed that it is baffling to note that Rivers State is not included among states to benefit from any of the projects to be executed with the fresh loan that the Federal Government is seeking to obtain from the World Bank.

Governor Wike in a statement by his Media Aide Mr Kelvin Ebiri made the observation when the Managing Director and Editor-in-Chief of the SUN (Newspaper) Publishing Limited, Mr. Onuoha Ukeh led a delegation to present a letter of nomination to him as the SUN Man of the Year 2020 Award at Government House, Port Harcourt on Monday.

The Rivers state governor observed that there are mounted attempts to frustrate federating States like Rivers, to actualise the constitutional provisions that empower them to harness their resources and revenues, particularly VAT.

The governor decried the situation where the legality of states collecting the VAT is not considered on the merit of the law by some public commentators including State executives, rather, they are politicising it and looking at it from prism of ethnicity and religion.

According to Governor Wike, what the FIRS was doing was illegal and could be likened to robbing from the states.

“You don’t even need to be a lawyer to know that VAT is not in item 58 and 59 of the second schedule of the 1999 Constitution as amended. Everybody knows that. It is not even in the concurrent list. Therefore, it falls under the residual list. It is not arguable. That yesterday nothing happens does not mean that today nothing will happen, or tomorrow something will not happen.

“Nigeria should encourage states to be strong enough to have resources to develop their states. we are in a federal system where we are practicing unitary system. Everybody at the end of the month will run to Abuja to share money. Nobody comes back to the state to think, how do I develop my state.”

He explained that the contest against the collection of the Valued Added Tax (VAT) was started by Lagos State which had sued the Federal Government at the Supreme Court. According to him, Rivers State only avoided their pitfall by suing the Federal Inland Revenue Service, FIRS, which is an agency of the Federal Government, that was illegally collecting the tax in the State.

“The issue of VAT did not start from Rivers State alone. It started in Lagos State when Lagos State challenged it in Supreme Court. Unfortunately, the Supreme Court said you (Lagos) shouldn’t have sued the Federal Government. All you would have done was to sue the agency. “

The governor observed that rather than commend Rivers State government for seeking to entrench fiscal federalism and constitutionalism, a particular State governor had threatened that the judgement of the court that declared that States and not FIRS are entitled to collect VAT within their jurisdiction, will not stand.

He urged those demanding for a brothers’ keeper consideration to first appreciate the position of the law and situate it rightly.

“Some people say, be your brother’s keeper. I have no problem in being my brother’s keeper but why not come out and say, let us tell ourselves the simple truth. As it is being provided in the law, who is the person responsible to collect the VAT.

“When you agree to that, that it is the state, then we can sit down to look at the different problems of states. And not to say be your brother’s keeper while you’re doing an illegal thing, in disobeying what the law says you should not do.”

Governor Wike stated that it is sheer act of discrimination for the Federal Government not to include Rivers State as one of the States that will benefit from projects for which it is seeking fresh foreign loans to execute.

“Look at the list of projects that states will benefit from this money they’re borrowing from the World Bank, that they have sent to National Assembly for approval, the only states that is not benefitting is Rivers State.

He further continued: “It is the prerogative of Mr. President ; if he says he does not like Rivers State, if the ruling party says they don’t like Rivers State, I won’t kill myself. But leave the one that the law says I should be the one to collect so that I will be able to develop my own state.”

Speaking further, Governor Wike explained that beyond the provision of infrastructure, his administration is seeking a law that will provide comfortable accommodation for judicial officers on retirement.

The reason, he said, is to ensure that, while in service, the judicial officers can concentrate on their jobs without cutting corners and avoid corrupt practices.

Managing Director and Editor-in-Chief of the SUN (Newspaper) Publishing Limited, Mr. Onuoha Ukeh said the SUN Man of the Year 2020 Award is the flagship of award the company.

According to him, Governor Wike was unanimously selected for his remarkable contributions to the socioeconomic development of Nigeria and promotion of fiscal federalism with his position on VAT, which will help in the restructuring of Nigeria.