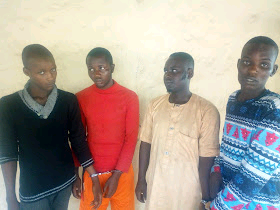 There was jubilation at the premises of the Chief Magistrate Court 2 in Yola, Adamawa state, when the court convicted and sentenced 4 notorious “Shila” boys to 5 and 7 years each in prison.

Those jailed for 7 years each without option of fine include; Aminu Adamu and Yusuf Adamu, while Ayuba Abdullahi, bagged 5 year prison term with N100, 000 option of fine.

The court also sentenced Ibrahim Bello to 5 years in prison without option of fine, while Kaior Isaiah, was discharged and acquitted for lack of proof of the offence he was charged for.

Magistrate Japhet Ibrahim Basani, of the Chief Magistrate Court 2 convicted and sentenced the boys after they were tried and found guilty for criminal conspiracy, extortion and theft.

The court held that the prosecution had proved ingredients of the offences against the convicts without any reasonable doubt, and sentenced them accordingly.

According to the prosecution, Aminu, Yusuf and Gaddafi Musa (now at large) of Wuro Kuturu in Yola North Local Government Area, criminally conspired and armed themselves with cutllases and knives and broke into a house at the same address.

The convicts stormed the house around 2:00am, on the 10th September, 2021, and threatened to kill one Umar Faruk Ibrahim, and his brother where they carted away 2 of their phones valued N100, 000 and N20, 000 respectively.

Fortunately, during the operation of the boys in the house, one of their victims, Umar Faruk Ibrahim, was able to identify Aminu, one of the convicts.

Faruk, reported the matter to the vigilante the following morning, and also voluntered to lead the team to the residence of Aminu, one of the convicts as a result of which he was arrested.

After his arrest, Aminu, led the vigilante which also led to the arrest of Yusuf, one of the accomplice and Ayuba, who bought one of the stolen phones.

NEWS PLATFORM learnt that Aminu and Yusuf sold the phone valued N100, 000, to Ayuba Abdullahi, one of the convicts at the sum of N10, 000, only.

In the course of investigation, Ayuba told the team that he gave the stolen phone he bought to Kaior, so as to keep it for him, and also led the team to Kaior’s business centre where he was apprehended.

Kaior, who was charged to court along side 3 other convicts for allegedly receiving stolen item, was found to have received the item without his consent that it was stolen property.

On his part, Ibrahim Bello, who hails from Kumo LGA, in Gombe state, conspired with one Sani(now at large) and entered a house in Demsawo street in Yola North LGA around 2:30 am, on the 24th August, 2021, with an intention to rob the occupants, but arrested at the scene of the crime.

When arraigned in court earlier, the convicts pleaded guilty after which the prosecutor, Seargent Kabiru Abubakar, called witnesses and tendered exhibits and applied for summary trial.

It was at this juncture that the court presided by Magistrate Japhet Ibrahim Basani, convicted and sentenced them accordingly.

Basani, held that the court had considered their allocutus and age bracket; hence the 7 year jail term instead of 14 as provided by law.