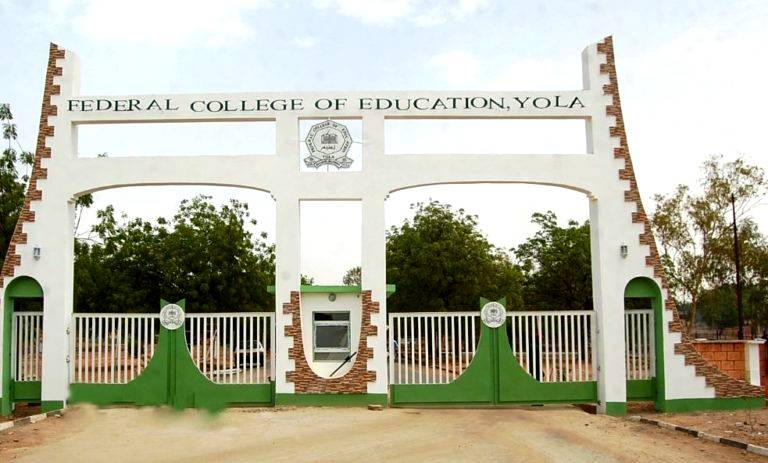 It is the 7th Matriculation Ceremony for the 2020/2021 Academic Session by the College which is affiliated to the University of Maiduguri.

Speaking during the ceremony, the Vice Chancellor, University of Maiduguri Professor Aliyu Shugaba charged the matriculants to take their studies seriously and eschew misdemeanaour indiscipline.

The Vice Chancellor who was represented by Professor Saidu Baba of the University, expressed readiness of the University of Maiduguri to support the FCE Yola in everywhere possible towards ensuring quality education and excellent academy performance.

Shugaba who noted that the oath taken by the students is sacrosanct, challenged them to observe it strictly being the basis for a refined academic life.

The vice chancellor urged the inductees to steer clear of all vices such as cultism, drug abuse and other irrational behaviours.

He disclosed that preparations are on top gear to induce additional six degree programmes by the university of Maiduguri in the FCE Yola in the next session.

He listed the programmes to include Bachelor’s degree in education in the fields of economics, business, physics, and political science among others.

According to Shugaba, the college has placed sufficient human and physical resources to facilitate smooth learning by students and create enabling teaching environment.

Earlier in his address, the Acting Provost, Federal College of Education, FCE Yola Mr. Johnson Blo Malgwa reiterated the college’s resolve towards producing quality and creative students who will impact positively on the society.

Mr. Malgwa revealed that so far the college has graduated over seven hundred students with twelve of them having first class honours.

The Acting Provost appreciated efforts of the the Vice Chancellor UNIMAID and the Management staff of the college toward the development and progress of the FCE Yola.

He warned that any student found breaching the rules and regulation of the college will be made to face appropriate sanction.

Malgwa who noted that the college has been unrelenting in making the stay of the students in the college comfortable maintained that it will continue on that trajectory.

Blo Malgwa appreciated the contribution of the Secretary to the Government of the Federation, SGF, Boss Mustafa and Fintiri led administration for facilitating the smooth road network in the college and creating enabling teaching environment respectively.

In her remarks, the students representative, Miss Olivia Godfrey, reiterated resolve of the students to justifying the confidence reposed in them by the college through dedication to their studies.

She urged the lecturers to tolerate their naivety and play a guardian and parental role to them.