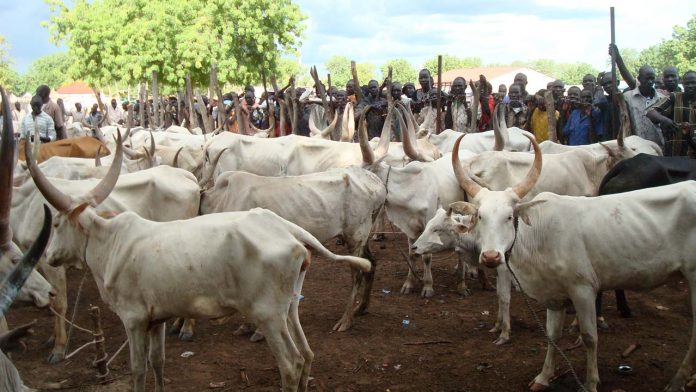 In a bid to reduce its reliance on monthly federal allocation for its revenue, the Adamawa State government says it is fully prepared to develop its livestock industry and agribusiness in general, according to Dr. Ishaya Dabari, the state’s finance commissioner.

Dabari, who stated this in an interview with the News Agency of Nigeria (NAN) on Thursday, in Yola, added that pursuing the agribusiness programme had become necessary to serve as alternative to oil and the monthly federal allocation.

Dabari noted that the livestock value chain was an internationally recognised vibrant business similar, to crop farming and was not restricted to any particular tribe or nation.

The 2019 statistics of the Adamawa State Ministry for Livestock Production had indicated that the state is the number one producer and supplier of cattle and beef in the country.

According to the commissioner, responding to the demands of the non-oil sector to its fullest is the only solution for economic diversification and reducing over dependence on federal monthly allocations.

Dabari said that the state’s agribusiness programme was intensively designed to develop standards and a vibrant economy in the state within the shortest possible period.

He added that the era of the state government depending on monthly federal allocation to pay workers’ salaries and execute developmental projects was over, especially given what happened at the Federal Account Allocation Committee (FAAC) meetings in the past three months.

“The last three months from April, June and July during the Federation Account Allocation Committee (FAAC) meeting, is enough a lesson for the state government to hasten its agribusiness programme.

“Because, over 80 per cent of the monthly amount distributed was from the non-oil sector, in fact, even in July, the NNPC contributed less than 10 per cent.

“If the Federal Government is responding to non-oil based economic sectors for revenue generation, same also with Adamawa State,” Dabari said.

He added that in line with its agribusiness plan, the state government had keyed into the Federal Government’s RUGA programme to boost livestock business for economic development.

Dabari explained that the state government was mainly focusing on livestock and other fundamental agricultural products in which it had comparative advantage.

He said that the essence of the agribusiness programme was to enable the state exploit its potentials and invest heavily in cattle businesses, through upgrades of major cattle markets into modern markets across the state.

In line with this development, the state government has commenced and done all the needful, including the legal requirements to launch a N25 billion naira bond, so as to harness its agricultural potentials.

“We have done all the needful and a prospectus had been issued and what remains are just a few things and very soon they will hit the markets.

“Beside livestock, there are other Agricultural products, but the focus will be livestock, which include cattle, goats, sheep, pigs and poultry.

“Because, we have looked at our natural endowments, God given lands, we know that cattle is one of the major areas which, if given proper attention, will boost the state’s economy by 50 per cent and beyond,” Dabari said.

He added that the state will exploit the entire value chain of the livestock sector, including production, processing and aggregation, where production of beef, milk, cheese and other products would be given priority attention.

Dabari said that the government projects that in the next two years, it should generate more than 50 per cent of its monthly FAAC.

“Right now, our Internally Revenue Generation is very poor, because up till today we are not generating up to 20 per cent of our FAAC allocation.

“However, with what we planned and put in place, definitely in the next two years, the state should generate substantial revenues from agriculture-based business,” he said.

He added that having keyed into the RUGA programme, a high-level committee had been put in place to look into the programme for proper and effective implementation.

When implemented, the programme would help to amicably resolve the lingering problem between farmers and herders, as well as issues of grazing reserves and ranching, the commissioner said, adding that it was also expected to provide jobs to the teeming unemployed youth in the state.

He pointed out that both farmers and cattle rearers were very important in boosting and sustaining the state’s economy.

“Therefore, anything that will bring them together to live in peace is among the government’s top priorities,” the commissioner said.