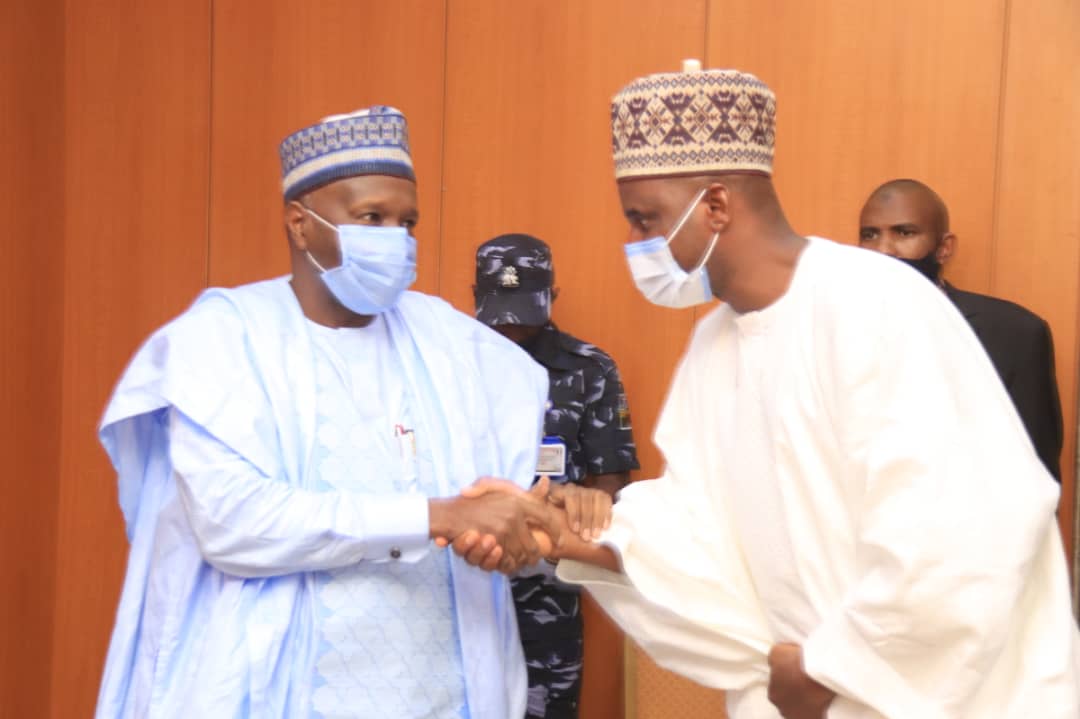 …”Vote of Confidence on Governor, an Unprecedented Resolution in History of Gombe State House of Assembly”

Governor Muhammadu Inuwa Yahaya says the giant strides and remarkable achievements recorded by his administration would not have been possible without the support of the State House of Assembly.

Governor Yahaya made this assertion when he received the leadership and members of the Gombe state House of assembly who were at the Government House to convey a resolution of vote of confidence on the governor passed by the state legislature.

Governor Inuwa Yahaya said the vote of confidence on him and his government is a pointer that executive and the legislature in Gombe State share common goal in the interest of the people.

“Speedy passage of bills we sent to legislature ever since this government came on board has contributed immensely in implementing our developmental policies and projects”.

Governor Inuwa Yahaya confirmed to the speaker and members of the House that the resolve he made to transform the State during the electioneering campaigns still remains fresh in his memory, saying it was the demands and the needs of the people that the present administration in the State is capitalising on to bring succour to the people.

Governor Inuwa Yahaya praised the healthy working relationship between the Executive and the Legislature in the State which he ascribed to be responsible for the development so far witnessed across the eleven Local Government Areas of the State.

He said with the vote of confidence passed by the State House of Assembly, his administration is encouraged to do more for the growth and development of the State, adding that with such solidarity, the State government under his leadership will continue to fight for the social, economic and political emancipation of the people.

“We have resolved to fight and we shall fight. Our fight is to bring peace, to bring tranquility and to bring improvement on the lives and lots of our people, that is the essence of governance; the House is out for that, the Executive arm is out for that and I believe we even have the support of the judiciary as far as this matter is concerned. So the fulcrum that supports democracy is working well in Gombe State”.

He said his administration will continue to work hard to achieve the lofty goals set out by the Gombe State Government for the benefit of the people and therefore thanked the citizens of the State for their support and engagement without which nothing can be achieved.

The Governor noted that despite the global economic meltdown occasioned by the covid-19 Pandemic, his administration, with the support of the State House of Assembly, has performed well, surpassing the many expectations of people within and outside the State.

Earlier conveying the unanimous resolution to the Governor, the Speaker Gombe State House of Assembly, Hon. Mohammed Abubakar Luggerewo explained that the vote of confidence endorsed and passed by the 24 members of House of Assembly followed the superlative performance of Governor Muhammadu Inuwa Yahaya which was appreciated in the course of discharging their constitutional responsibility via oversight function by standing committees of the House.

“Your Excellency, time will not permit us to highlight or mention categorically what we have seen and witnessed at the field but I want to assure you that the Honourable members are fully satisfied that you achieved tremendously and extraordinarily in the areas of economy, education health, Agriculture, social Investment and many others. You have equally come up with a 10- year development plan, indicative of the fact that you care for the future of the younger generation”.

Other areas that equally got the attention of the administration of Governor Muhammadu Inuwa Yahaya as explained by the Speaker, included the provision of portable water, rural and urban electrification and the general welfare of the youth through the Gombe Goes Green 3G which empowered over 27000 thousand young individuals in the State.

He said the political disposition of the Governor in project continuity is a clear indication that he is a prudent financial manager and a leader that is desirous to see to the growth and development of the State in all its ramifications.

It is in view of this that the speaker of the Gombe State House of Assembly said members deemed it fit to pass a vote of confidence on the Governor and to also declare their Unalloyed loyalty to him as a way of encouraging him to do more for the overall development of the State.

Earlier moving a motion to that effect in today’s plenary, the House leader Hon Ladan Yerima Gaule said the construction of rural roads, rural water supply and electrification, construction and renovation of Hospitals and Health Centres as well as distribution and sales of fertilizers to farmers at subsidized rate by the State Governor have put on smiles on the hitherto gloomy faces of their constituents.

The house leader added that the ability of the State Governor to achieve a lot within the lean resources of the state after creating an atmosphere of peace within two years is a clear testimony of his prudence in management of resources and his zeal to realize his dream – the dream of the founding fathers of Gombe State.

This feat he said is worthy of commendation and therefore moved that the House pass a vote of confidence on the State Governor.
In their separate contributions, Honourable Musa Buba (Balanga North), Hon. Samuel Markus Wina (Pero Chonge), Hon Adamu Sale Pata (Yamaltu East) and Shuaibu Adamu Haruna (Kwami East) concurred with the submission of the House leader which they said has reflected the collective position of the entire Members of the House.

They added that this unprecedented achievements recorded by Governor Inuwa Yahaya within a short period is a source of pride to all state legislators and indeed to the people of their respective constituencies..

JUST IN: Bauchi Gov Withdraws Nomination Of Burga As Commissioner