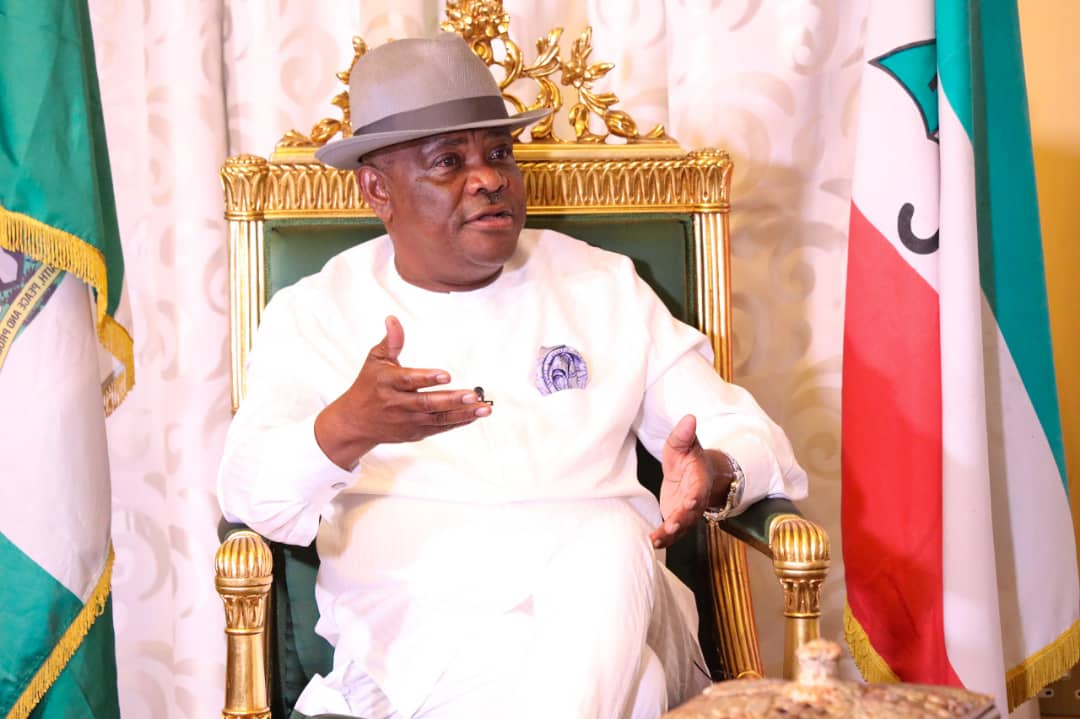 Governor of Rivers State, Nyesom Ezenwo Wike says the present National Working Committee of the Peoples Democratic Party, PDP, cannot lead the party to victory in the 2023 general elections, hence the quest for its replacement.

The governor in a statement by his Media Aide Mr Kelvin Ebiri has maintained that the internal rumbling that was recently witnessed in the party was following the failure of the NWC to carryout its responsibility as an opposition political party effectively.

Speaking on a national television in Port Harcourt on Tuesday, Governor Wike stated that the PDP remains the only credible alternative party that Nigerians are expecting to take over power in 2023, given the woeful performance of the ruling All Progressives Congress, APC.

“And we said with what we have now, it will be difficult to take over power in 2023 if there are no amendment. Leadership was the problem. The point is this, the current NWC, as it is today, cannot lead the party to victory. Nobody has said they have not done well, one way or the other, but we are talking about the challenges ahead.

“That is why we are pushing for the party to have other people to lead the party and to give it a different strength altogether. If you know APC, you know that you need a robust, determined leadership of the party (PDP) to make sure you match them word by word, action by action.”

Governor Wike said anyone who loves the PDP and means well for the party will adhere to the resolutions reached after the intervention of the governors, Board of Trustees and elders to douse brewing crisis in the party.

The governor dismissed insinuation that he is nurturing a presidential ambition, hence his opposition to the current NWC. He stated that his primary preoccupation is to see how the PDP could be better positioned to win the 2023 general elections.
On the issue of the amended Electoral Act, the governor said Nigerians are expecting President Mohammadu Buhari to veto the bill over the rejection of electronic transmission of election results by APC members in the National Assembly.

The Governor accused President Buhari of supporting the position of APC members in the National Assembly even after he had attested publicly on how he benefitted from the introduction of card reader device by former President Goodluck Jonathan’s administration.

He stressed that the electronic transmission of results is at the centre of conducting credible and transparent election, and it behoves the President to bequeath to Nigerians a credible electoral process as he had promised.

“Mr. President gave Nigerians the assurance that, one of the legacies that he will leave is to make sure that we have credible, and transparent election. And one of the steps to show transparency is, let the election results be transmitted electronically.

“You remember when Mr. President was declared the winner of that election in 2015, he said that the introduction of the card reader was a good innovation. We thought he would have improved on that. But instead of improving on that, we are going backwards.”

The governor also wondered why the Senate committee chairman on INEC, who recommended the transmission of electoral results electronically, voted against it.

Governor Wike commended the passage of the Petroleum Industry Bill into law, but declared that allocation of a meagre 3 percent for host communities in the Niger Delta is unacceptable.

“We believe that 3 percent is not enough as regards the kind of pollution and environmental crisis we have had because of oil exploitation. I thought what Mr. President would have done was to tell members of National Assembly, yes, you have done what you are supposed, but again, you need to take into consideration the yearnings of the host communities.”

The governor bemoaned the exclusion of oil producing state governments in the implementation and administration of the 3% oil revenue recommended for host communities in the Petroleum Industry Act. He expressed concern that the International Oil Companies will take advantage of this, to continually instigate crisis in oil producing communities in order not to pay the 3 percent due the host communities.

Speaking on the ongoing constitutional amendment process, Governor Wike said it is satisfying to know that such function is not an exclusive preserve of the National Assembly.

According to him, Nigerians are very confident in the process because they know that whatever the National Assembly has done, there will be the need to secure a two-third of votes from the 36 State Assemblies.

“But the confidence people have today is that the amendment of the constitution will get to the State. Take for example, the Federal Government may not be in support of state police but you have two-third of states that say they need state police, so in that case, state police will pass. There are issues that you may not like, but these are done on clause by clause basis.”

Speaking the issue of Valued Added Tax, Governor Wike clarified that the Rivers State government went to court to seek constitutional interpretation of the enabling law on whether State or Federal Government should be the sole collector of VAT.

He stressed that the Rivers State government is not perturbed by the decision of the Federal Inland Revenue Service (FIRS) to appeal the Federal High Court judgment which declared that it is unconstitutional for the Federal Government to collect VAT.