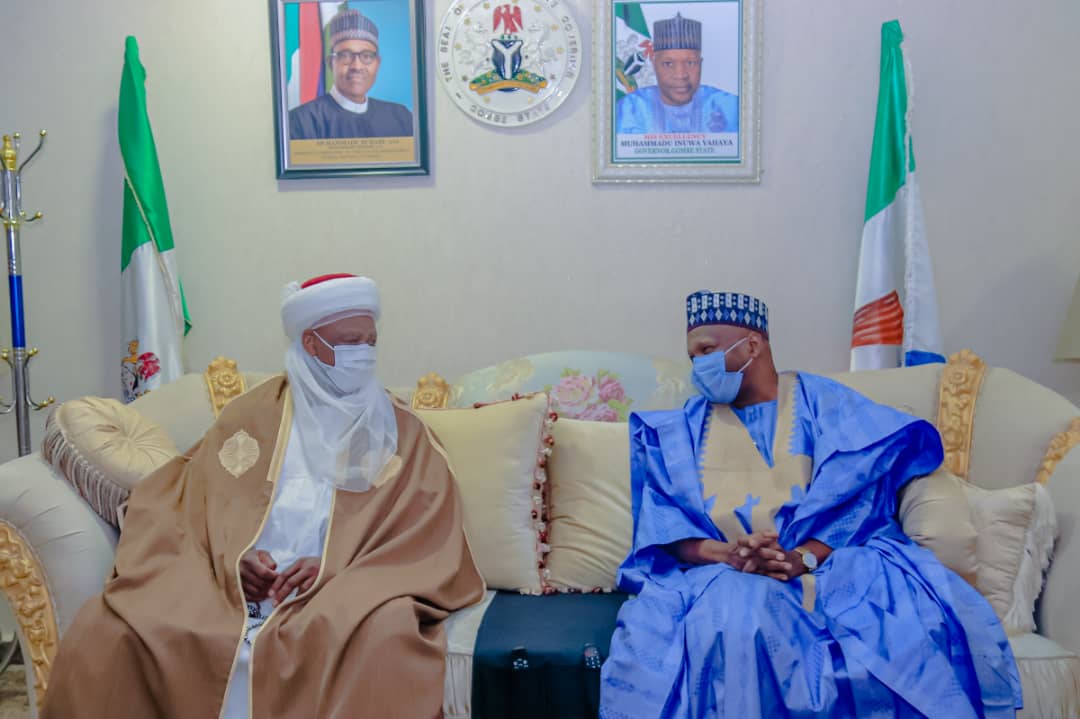 The Sultan of Sokoto and President-General of the Nigerian Supreme Council for Islamic Affairs (NSCIA), Alhaji Muhammad Sa’ad Abubakar lll has described Governor Muhammadu Inuwa Yahaya as a truthful, passionate, accountable and steadfast leader with passion for peace, unity and development of his state and Nigeria.

The Sultan of Sokoto passed the compliments when he paid a courtesy visit on the governor at his official residence in Gombe.

Alhaji Sa’ad Abubakar who also described Governor Inuwa as a long standing ally, saying he has been following the governor’s laudable achievements on several developmental projects in the last two years.

The spiritual leader of Muslim faithful in Nigeria noted that as a long standing close confidant to the governor for nearly four decades, he will continue to encourage him to do more of such gigantic projects and will equally advise him to correct and improve on his shortcomings, if any.

He assured that in no distant time he will pay a visit to the state to fully appreciate the excellent work of Governor Muhammadu Inuwa Yahaya.

The Sultan also enjoined leaders at all levels in the country to put in more effort in order to tackle insecurity, poverty hunger and all the negative indicators confronting the Nigerian State.

The NSCIA President- General added that the traditional institution exist to always guide and advise political leaders and not to criticize or cast aspersions on them.

“We do not criticize leaders, we advise them, we critique their activities because criticism is different from critique so when you are doing something right we pray for you and push you to do more and when you are doing wrong as a human being, we’ll advise and caution you on what you are supposed to do and if the Almighty makes it happen for you to do what we advise and it becomes good for us we thank you and if you don’t we have discharged our responsibility very well”.

The Sultan of Sokoto was also of the view that traditional institutions will not shy away from constantly advising leaders to be just and do right to all manner of people irrespective of tribal or religious affiliations.

He noted that both the traditional and political institutions in the country are partners in progress and not competitors, saying the two parties should continue to have a healthy working relationship for the benefit of the Nigerian people.

He emphasized the need for leaders at all levels to fear Allah knowing fully well that he is the one that gives and takes power to whomever he pleases and at the time he chooses.

Alhaji Sa’ad Abubakar said the Sultanate Council in appreciation of governor Yahaya’s humble attributes and accomplishments will soon confer a chieftaincy title on him.

In his response, Governor Inuwa Yahaya described Sultan Sa’ad Abubakar lll as a charismatic leader ordained by God and who epitomizes the true essence of Islam and engenders peace and tranquility, especially at a time when the country is faced with numerous social, economic, political and religious challenges.

Governor Inuwa Yahaya expressed satisfaction with the leadership qualities of Sultan of Sokoto and gratitude for uniting the Ummah within and outside the country, describing the traditional ruler as an embodiment of truthfulness and forthrightness.

He said being a Governor in a cosmopolitan State like Gombe, his administration remains committed and is determined to carry everyone along without recourse to indigene settlers dichotomy, citing an example with an igbo man residing in Gombe among the appointees in his government which he said signifies unity and social cohesion among all the multi ethnic groups in Gombe state.

Governor Inuwa Yahaya assured Sultan Sa’ad Abubakar lll that his administration will continue on the path of peace of equity, equality and justice to which the Sultanate stands for and ultimately Islam as a religion.

“We would like to assure you that the path on which you put us, we shall never derail, we shall work hard to make sure that we bring prosperity, peace, harmony and progress to our people because without that it means we as leaders have failed and we shall not fail you by the grace of God”.

The courtesy visit witnessed the presentation of two historical books on the Caliphate by the Sultan of Sokoto to Governor Muhammadu Inuwa Yahaya and the 10 Year Gombe Development Plan by the Governor to Sultan Sa’ad Abubakar lll.

Shortly after the visit, Governor Inuwa Yahaya led the Sultan of Sokoto Sa’ad Abubakar lll, Emir of Gombe, Alhaji Abubakar Shehu Abubakar lll and other dignitaries to Commission a road named in his honour of the Sultan at Gandu quarters of Gombe metropolis.

NASS Opposition To Electronic Transmission Of Poll Results, A Coup Against Nigerians-Wike