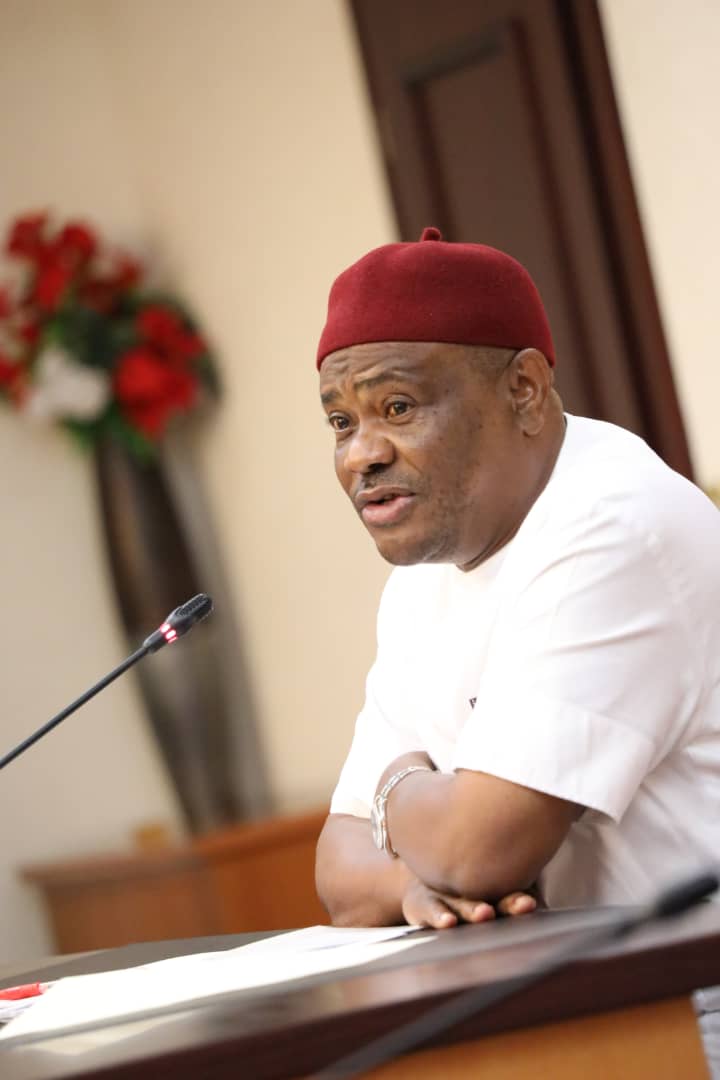 Governor of Rivers State, Nyesom Ezenwo Wike says the rejection of electronic transmission of election results by All Progressives Congress (APC) members in the National Assembly, is tantamount to a coup against Nigerians desirous of a free, fair and credible election.

The governor in a statement by his Media Aide Mr Kelvin Ebiri noted that President Muhammad Buhari’s failure to prevail on APC members in the National Assembly to support the inclusion of electronic transmission of election results in the amended Electoral Acts, proves he does not intend to leave a legacy of a transparent electoral process.

He stated this during the official presentation of letter of nomination to him as “the 2020 Governor of the Year Award” by the management of the Leadership Media Group at the Government House, Port Harcourt, on Tuesday.

Governor Wike remarked that the current National Assembly capitalised on the seeming political indifference of Nigerians to deliberately vote against the inclusion of electronic transmission of election results in the amended Electoral Act.

The governor, described National Assembly members who voted against transmission of election results electronically as enemies of the country, because their action is detrimental to the growth and consolidation of the country’s democracy.

“I can’t believe anybody who went to school in this digital period, will vote against electronic transmission of results. What kind of country is this? What kind of National Assembly members do we have?”

Governor Wike declared that the rejection of electronic transmission of election results by APC lawmakers, even when the Independent National Electoral Commission (INEC) had affirmed that it has the capacity to electronically transmit results, is tantamount to a coup against the citizens of the country.

“It is a coup against the people, and when you plot a coup, you know the consequences of plotting a coup. National Assembly members have plotted coup against Nigerians and Nigerians should hold them responsible. All they are planning is to rig election, because they know Nigerians have abandoned them.”

The Rivers State governor said he had expected President Buhari, who had openly declared that he respects former President Goodluck Jonathan, for not compromising the 2015 general elections, to build on the electoral legacy of his predecessor.

“If Jonathan did not believe in the transparency of the election, he would not have allowed card reader to be used. So, he introduced the card reader as a sitting President, knowing fully well that that could be an albatross to him. But he said no, I want us to move to the next level.”

Governor Wike, stated that though President Buhari had repeatedly declared that he will ensure the conduct of a free, fair and credible election in 2023, he doubts his sincerity, particularly, for failing to rein in those APC members who voted against electronic transmission of election result.

“Mr. President cannot tell us that sincerely he wants to conduct a free, fair, credible election. Let nobody deceive you. It is very clear that there is no sure intention at all.”
The governor, who stated that he has never and will never influence any media organisation to nominate him for an award, advised media groups against bestowing award on non-performing political office holders. According to him, giving award to an undeserving governor, for instance, is an act of corruption.

Governor Wike, commiserated with the family and management of the Leadership Media Group over the death of the founder of the newspaper, Sam Nda-Isaiah. And urged them to use the newspapers as a voice for the people.

“Let me thank the leadership of the newspaper for finding us worthy or qualified, to be nominated for the Governor of the Year Award. Therefore, we dedicate this award to the glory of God Almighty and to the people of the State.”

He said it is gladdening that there are people somewhere who recognise the effort he and members of his team are making to change the narrative in terms of governance in the country. To this end, he reiterated that the award will energise his administration to even work harder for the State.

The Group Managing Director of Leadership Newspaper, Muazu Elazeh, said they were in Port Harcourt to formally present Governor Wike the letter of his nomination as the Leadership Governor of the year and then to invite him to attend Leadership conference slated for September.

“When the board of editors of Leadership met for this nomination, because it is something we do every year, when your name was mentioned, I think it is the only name that received unanimous endorsement because of your practical approach to leadership and governance; because of your focus in infrastructural development which is resetting the business and economy of Rivers State.”

Similarly, Executive director Leadership Media Group, Abraham Nda-Isaiah said this is the first time in the history of Leadership newspaper that a governor has been nominated twice in the life of an administration. He recalled that Governor Wike was first nominated for the award in 2017.