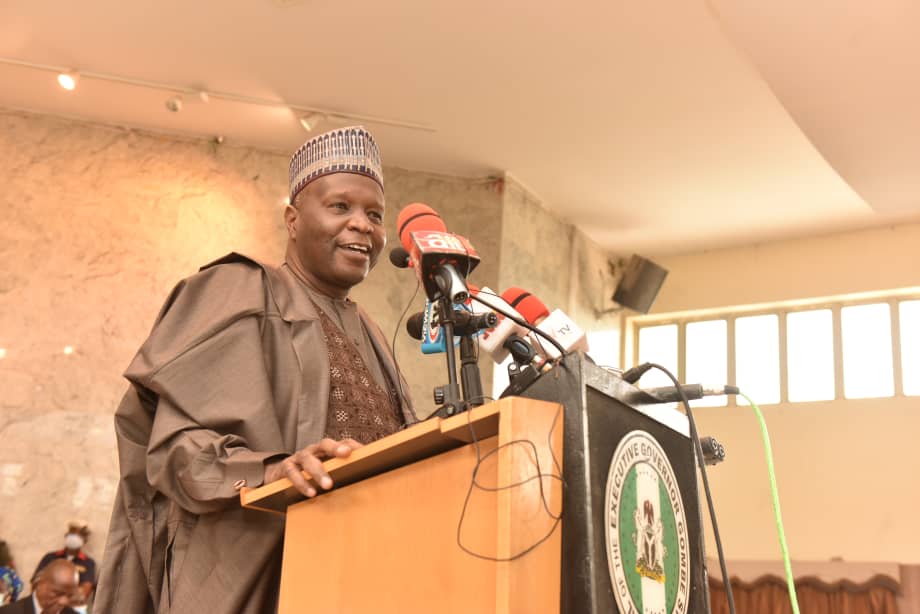 In a two point communiqué read by the state Governor, Alhaji Muhammadu Inuwa Yahaya after the stakeholders meeting held at the New Banquet Hall of the Government House, the APC stalwarts also unanimously affirmed their unalloyed loyalty to Governor Muhammadu Inuwa Yahaya to provide direction to the party both in the build up to and during the congresses in the state and always.

The communique read in part, “The meeting resolved to adopt consensus in the forthcoming congresses of the party at the ward, Local government and state levels.

“The meeting also affirmed loyalty to the leadership of Governor Muhammadu Inuwa Yahaya in providing direction to the party in the conduct of all congresses that will come up very soon at all levels in the state.”

Governor Inuwa Yahaya had, while speaking during the meeting, said the unanimous endorsement by the critical stakeholders of the APC that the party adopts a consensus method in the forthcoming State Congress as permitted by the guidelines of the National Care Taker/ Extraordinary Convention Planning Committee, is an indication that the party is rock solid and indivisible in the State.

The Governor expressed his gratitude to APC stakeholders and supporters in the State for their support and encouragement without which he said, he would not have been Governor.

He assured stakeholders at the meeting that the APC Government under his leadership will do everything necessary to deliver on its campaign promises which have so far seen the revitalization of the health sector, revamping of Agriculture, repositioning of education, construction of road networks across the State as well as the institutionalization of policies and programmes for the economic growth and development of the State among other areas.

While commending stakeholders of the party in the State for their understanding and cooperation so far, the Governor reminded them that not everyone is destined to be a leader but that the party is committed to carrying everyone along in the scheme of things.

“As we approach our party’s congresses, let us have it at the back of our minds that only a few of us will be chosen to steer the affairs of our great party and will therefore need our support and encouragement if we must strengthen the party and make it unbeatable”.

The Governor said his support for concensus candidate came to light when the National Headquarters of the APC directed the dissolution of all states party executives with view to forming new
ones, explaining that he simply had endorsed, without hesitation, the continuation of the old APC party executives in Gombe State.

Governor Inuwa Yahaya used the occasion to explain the social and economic challenges facing the State viz-a- viz the quest by politicians for political patronage, saying while his administration is doing the needful in the areas of infrastructure and human capital development, stakeholders of the party will also be carried along.

Earlier speaking, the former Governor of Gombe State, Senator Muhammad Danjuma Goje expressed gratitude with the turn of events at the APC stakeholders meeting, throwing his weight behind the concensus method to demonstrate the unity of the party in the State.

“Let’s allow the Governor to chart the course for the party in the State and I have the conviction that the Governor will do justice in that regard”.

Senator Danjuma Goje therefore called for understanding and cooperation across board irrespective of the outcome of the congresses, saying it is only by so doing that the party can wax stronger and continue to provide good leadership in the State.

The Acting Chairman of the Caretaker Committee of the All Progressives Congress, APC, in Gombe State, Mr Nitte Amangal told stakeholders at the meeting that the laws and guidelines of the party make provision for concensus in electing party officials, expressing confidence that APC with the consensus, the party’s unity and strength will continue to blossom, especially with Governor Inuwa Yahaya at the helm.

While setting the stage and giving and overview of the meeting, the Chief of staff Government House, Abubakar Inuwa Kari said the stakeholders’ meeting was convened to deliberate on how best to approach the forthcoming congresses in the State following the release of the time table by the National Headquarters of the party.