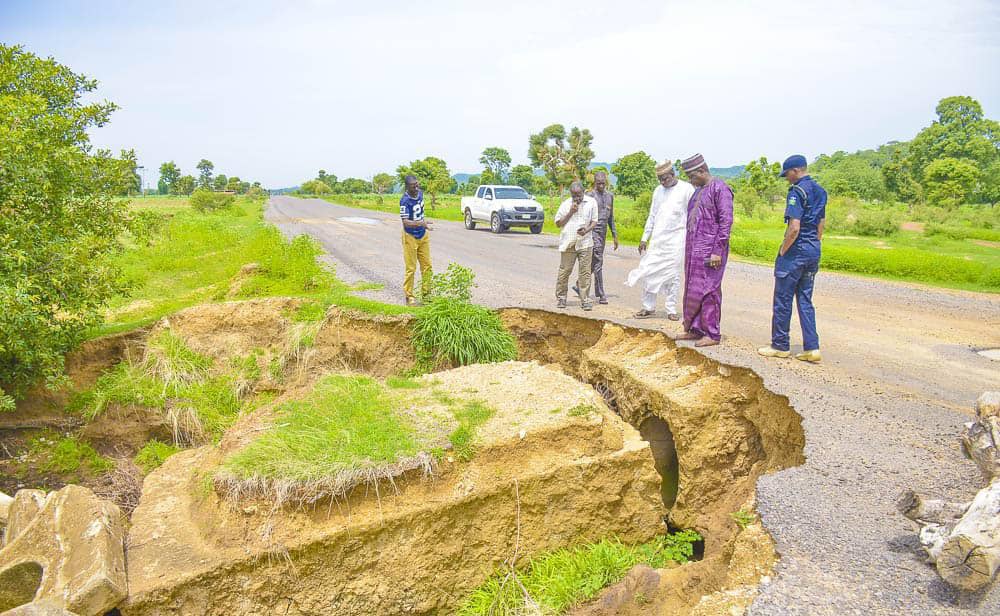 The Speaker of the Bauchi State House of Assembly Rt. Hon. Abubakar Y Suleiman has visited the scene of collapsing bridges and erosion spots along Ningi-Burra and Burra-Yadagungume roads in order to assess the condition of the roads, today.

He visited Jigawar Kuran birdge which is badly affected by erosion and overflow of water, Lumbu bridge along Ningi-Burra road and Lumbu access road which are at the verge of cut off, collapsing bridges in Mazai, Bashe, Tamba and Burra as well as the Burra-Yadagungume bridges which are washed away by water and cut off many towns from Burra and other parts of the State.

The Speaker who was physically disturbed by the condition of the roads, sympathized with communities along the roads for the hardship they are going through whenever there is heavy rain in the area.

In Lumbu and Jigawar Kuran, the Speaker assured the community who converged to receive him that he will take their request of an access road to Lumbu town from the main road and erosion control on Lumbu and Jigawar Kuran bridges to the Government, saying he is full of hope that Governor Bala Abdulkadir Mohammad will act swiftly.

In Burra, the Speaker worried that even though the State Government has recently constructed two bridges along Burra-Yadagungume road to end the hardship faced by the communities, water has washed them away and the communities are cut off from other parts of the country.

On the request by the community for redirection of the road, construction of new bridge and construction of Burra-Yadagungume road, the Speaker who trekked for a long distance to assess the situation, assured them that he will take up the matter to the Governor.

Rt. Hon. Abubakar Y Suleiman who was in company of civil engineers from the Bauchi State Ministry of Works and Transport and some aides expressed the readiness of the present administration to solve problems affecting the people of the State and take development to all nook and crannies.

While urging Governor Bala Mohammad to come to their rescue, they commended the Speaker for the visit which they described as unprecedented, saying the gesture has shown the commitment and concern of the present administration for the plight of the people.

Meanwhile, the Speaker has visited site of the ongoing construction of Balma-Arinja road which he facilitated.

He expressed his satisfaction on the speed and the quality of the road and hoped that the contractor will maintain the tempo and deliver the project in time.

The Supervising engineer for the project Engr Buba Saraki who took the Speaker round the site, assured the Speaker of the timely delivery of the project as well as it’s quality.

According to him, the workers have embarked on Sallah break but will resume on Thursday to continue with the work which they hope to deliver by December.

The Speaker was received in Balma by the Village Head of Balma Alhaji Hussaini Saleh Balma, former member representing Ningi Central Constituency in the State Assembly Hon. Abba Saleh Balma and crowd of his supporters.