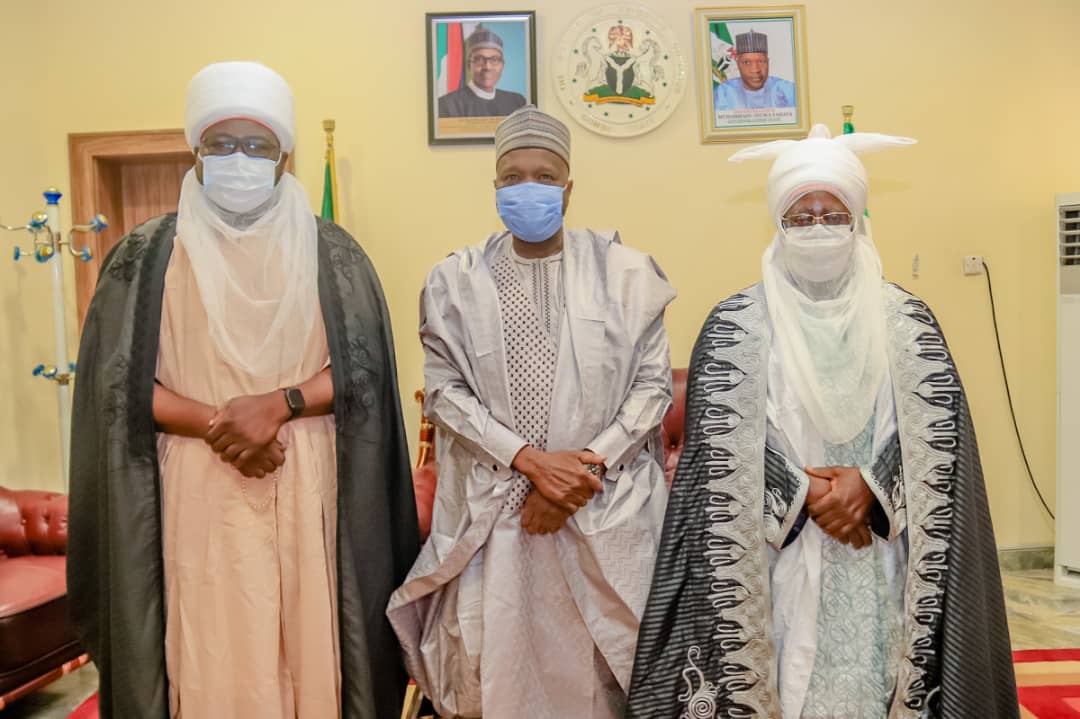 …Says His Administration Working in Line With Campaign Promises

Governor Muhammadu Inuwa Yahaya says Gombe State Government under his leadership will continue to expand the frontiers of social and economic services as well as provision of more infrastructure across all the nooks and crannies of the state in line with his campaign promises.

The Governor stated this when he played host to the people of Kaltungo Chiefdom led by the Mai Kaltungo, Engr Sale Mohammed at the Banquet Hall of the Government House.

He said the projects currently being executed by his administration in all parts of the State are in line with his campaign manifesto which main thrust was to reposition the health sector, provide quality education, good road infrastructure and build human capital among other areas of interest.

Governor Inuwa Yahaya explained that the mandate given to him by the people of Kaltungo Chiefdom and by extension the entire State is a trust of responsibility that is gradually transforming into the provision of infrastructural development and other social services for the benefit of the people.

He disclosed that his administration will soon make public some of its modest achievements side by side with his campaign manifesto for the people of the State to juxtapose with his campaign promises in order to assess the performance of the incumbent All Progressives Congress, APC- Led government in the state in the last two years.

“I challenge the people of Gombe State, especially those in Gombe south senatorial district, to take a look at the performance of the previous administrations from Orji to Bawa, Hashidu to Goje and Dankwambo and tell if their records of performance in their areas under two years can be equated with what we have achieved in our mid term”.

He said the road projects currently being executed in Gombe south and other parts of the State were conceived to boost economic activities and social interactions as well as to ease the challenges associated with long distant travels like the hardship once being experienced by the people of Balanga south.

Governor Inuwa Yahaya used the occasion to warn those in the habit of fomenting trouble to stay clear as his administration will not condone any breach of law and order in Gombe state.

Earlier, the leader of the delegation and Mai Kaltungo, Engr Sale Mohammed said the people of Kaltungo and Shongom Local Government areas remain grateful and indebted to Governor Muhammadu Inuwa Yahaya for his social and economic intervention in their area.

He pledged the support and solidarity of the people of his Chiefdom to the administration of Governor Inuwa Yahaya for the continuation of his pro-poor policies and programmes.

Also, the Mai Tula, Abubakar Buba Atare said the joy of the people of Tula knows no bound,considering the gigantic road project currently being executed which stretched from Bambam to Tula Yiri and the perimeter fencing of the famous Government Girls Secondary school Tula which had been left unattended to by the previous administrations for so many years.

In his remarks, the Majority Leader of Gombe State House of Assembly, Hon. Yarima Ladan Gaule said the ongoing road construction from Bambam to Tula Yiri and the recent award of contract for the reconstruction and remodeling of Kaltungo General Hospital are among the giant strides of the administration of Governor Muhammadu Inuwa Yahaya which have touched the lives of the people in more special ways.

He assured that the people of the area will continue to cherish the Governor and give him all needed support now and always.

The Chairman of Kaltungo Local Government Council Faruk Aliyu, expressed gratitude to the Governor for touching the lives of many people in so many positive ways, noting that Governor Muhammadu Inuwa Yahaya has demonstrated rare characteristics of a true democrat who deserves the support of all and sundry. He pledged their continued loyalty, support and solidarity to the APC administration in the state.

In a like manner, the Chairman of Shongom Local Government, Yohanna Nahari described Governor Muhammadu Inuwa Yahaya as ingenious leader who has succeeded in marshaling and navigating Gombe state through the prevailing economic challenges to prosperity.

Highlight of the event included cultural performance by various groups from Kaltungo Chiefdom.