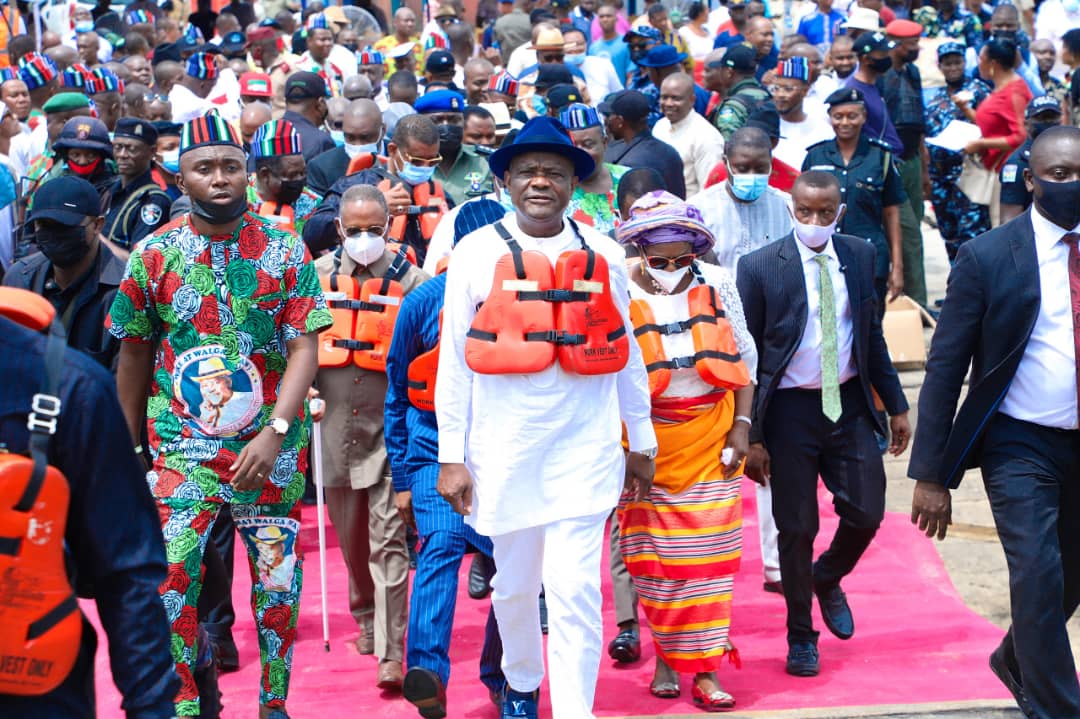 Governor of Rivers State, Nyesom Ezenwo Wike says there is no level of internal crisis within the Peoples Democratic Party (PDP) that will make the State to abandon the party.

Every squabble within PDP, Governor Wike pointed out, is always considered as a family matter and so addressed, with everybody accepting the final resolution.

Governor Wike in a statement by his Media Aide, Mr Kelvin Ebiri made the assertion on Thursday at the flag-off ceremony for the sand-filling and land reclamation of Okrika New Town and Okochiri Internal Roads in Okrika Local Government Area.

The governor described those leaving the PDP as lily-livered persons who are hunted by their nonperformance in office and seeking protection for their shortcomings by joining the All Progressive Congress (APC).

“If we are angry with PDP, we will fight it there. I will not run away. It’s a family fight, if you can win me, you win, if I win you, so be it. And we will always win.”

Governor Wike said there is no attraction that will make him to join the APC or betray the trust of his supporters. According to him, he is too busy to make himself available be taken by another governor to Aso Rock to have a shake with the president to celebrate defection.

Governor Wike stressed it makes no meaning to join a party that has not done anything good in Rivers State and has no record of success in delivering development to Nigerians.

“This is one State that, for whatever it is, is the hub of the Peoples Democratic Party (PDP). Whether anybody want to like us, you don’t want to like us, if we do anything otherwise, then people will know the difference.

“And they know we can’t do anything otherwise because we don’t believe in giving flimsy excuses.”

Speaking about the land reclamation project, Governor Wike explained it’s importance for the coastal community of Okrika because it will avail them lore land for expansion and future development.

He said his administration identified and do projects that meets the direct needs of the people and the reclaimed land will become a new town for the Okrika people.

About the Okochiri Internal Roads, Governor Wike noted that politicians are no more trusted because they fail to keep their promise to electorate. But he is different because he has fulfilled his campaign promise to the people of Okochiri.

Performing the flag-off, PDP governorship candidate in Ondo State, Eyitayo Jegede (SAN) noted the landmark projects in Okrika as a show of courage and boldness of Governor Wike to develop the entire State.

Jegede acknowledged the enormous support and goodwill of the Okrika people for Governor Wike.

According to Jegede, Governor Wike has provided trusted leadership and has become the model for new crop of leaders that are emerging across the country.

“I saw that there is a new phase of development in Port Harcourt , the reconstruction of the roads that are going on. And I wondered, what about the other communities? I know Rivers State has 23 local governments.

“So, I’m not surprised today that we are in Okrika local government and that we are flagging-off project, land reclamation. I know that land has been a challenge to the people of Okrika. I love your courage sir. I love what you’re doing for this community.”

In his project description, Special Adviser to Governor Wike on Special Projects, George-Kelly Alabo said the sand-filling and land reclamation project will secure 25 hectares of land that will provide about 536 plots of land for the Okrika people. According to him, the project will be competed in 9 months.

On the Okochiri Internal Roads, Alabo stated that 9 roads with a total measurement of 5.642 km and 7.3 m wide will be reconstructed for the people. It shall be completed in 12 months.