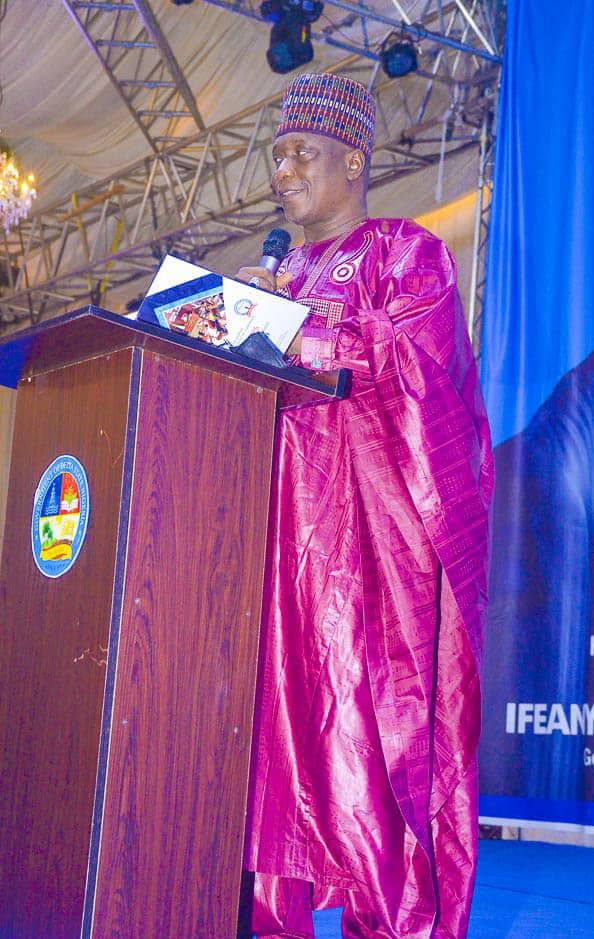 The Chairman of the Conference of Speakers of State Legislatures of Nigeria and Speaker of the Bauchi State House of Assembly has said that Delta State is one of the few states in Nigeria that have become good reference points on the implementation of financial autonomy for states legislature and judiciary.

He made the statement while delivering a goodwill message during the opening ceremony of the 2021 Third Quarter General Meeting of the Conference which takes place at Event Centre, Asaba, Delta State, today.

The Chairman explained that Governor Ifeanyi Okowa’s support for the implementation of financial autonomy for both the state legislature and judiciary as granted by the 4th Alteration to the 1999 Constitution of the Federal Republic of Nigeria is commendable.

“We are however not surprise at your passion and support for the independence of these arms of government. Your Excellency, being a senator of the federal republic, you have simply demonstrated through your rich experience that one of the ways our democracy can endure is by strengthening the relevant institutions.

“Your Excellency, we are also aware of many developmental projects being delivered by this government under your able leadership in the State. We equally acknowledge the feats would not have been realistic without the support of the Delta State House of Assembly. Therefore, we like to express our appreciation to the 6th and 7th Delta State House of Assembly under the leadership of Rt Hon Rt Hon Sheriff Oborevwori Oborevwori, JP for good governance and unalloyed support to this government on one hand and for successful hosting of the Second Quarter General Meeting of the Conference of Speakers of State Legislatures of Nigeria on the other hand.” He said.

Rt. Hon. Abubakar Y Suleiman highlights that the quarterly meeting in Asaba will avail them a medium to deliberate on issues affecting the states legislature; and other topical national issues for the development of the country, especially security which is top on their agenda.

According to him, the Conference acknowledges that this is a critical stage in the life of the Country hence the need that all hands must be on deck to proffer solutions to all the problems threatening our unity.

In his welcome address, the Speaker of the Delta State House of Assembly who is also the Deputy Chairman of the Conference, Rt. Hon. Sheriff Oborevwori thanks the Conference for choosing Delta State to host the Second Quarter Meeting, saying that the State has become a beautiful bride for hosting of national events because of its peaceful and serene environment.

The Deputy Chairman reiterates that the Conference of Speakers has become integral part of the Country’s political architecture and during the Asaba meeting, they will discuss critical issues confronting Nigeria as a nation with a view to proffer solutions where possible.

While commending the Conference’s Chairman and all stakeholders for resolving issues on the implementation of the financial autonomy to States Legislature and Judiciary, Speaker Oborevwori explained that Delta State House of Assembly has been enjoying financial autonomy since 2019 and they don’t take their memos to the Executive for approvals thus they will remain thankful to Governor Okowa.

Declaring the Meeting open, the Executive Governor of Delta State Senator Dr. Ifeanyi notes that the first step to building sustainable partnership between the executive and legislative arms of government for effective service delivery is for both organs of government to work with the consciousness that separation of power for good governance.

He added that each arm must realise that the principle of checks and balances as constitutionally provided for, is to prevent abuse of power, which, if allowed to fester, will ultimately circumvent the rights and will of the governed.

“The relationship between the executive and legislature should be governed by trust, mutual respect, and deference, each bearing in mind the tenets of separation of powers as required in the presidential system of government.

“It is exigent that both see themselves as complementary partners working towards the same goal, which is the development of the State for the greater good of all. Trouble looms when the executive arrogates to itself the power to do as it wills or the legislature takes undue advantage of its oversight function to twist the arms of the executive for selfish ends.

“In Delta, this has been the secret, if you will call it that, of our success in the last six years. The relationship between my administration and the legislature has been one of respect, cooperation, and trust. That is not to say that we have not had moments of disagreement but whenever this occurred, we engaged ourselves in proper dialogue, rather than open confrontation, to reconcile our differences.” The Governor said.

Governor Ifeanyi Okowa asserts that Delta State is one of the first States to implement financial autonomy for the legislature with the enactment of the Delta State House of Assembly Fund Management (Financial Autonomy) Law, 2019, adding that they are currently proposing some amendments to the law to align it with current realities.

He urged the Conference to redouble its efforts to work for greater synergy between the executive and the legislature in a way that the States can develop sustainably and democracy strengthened.