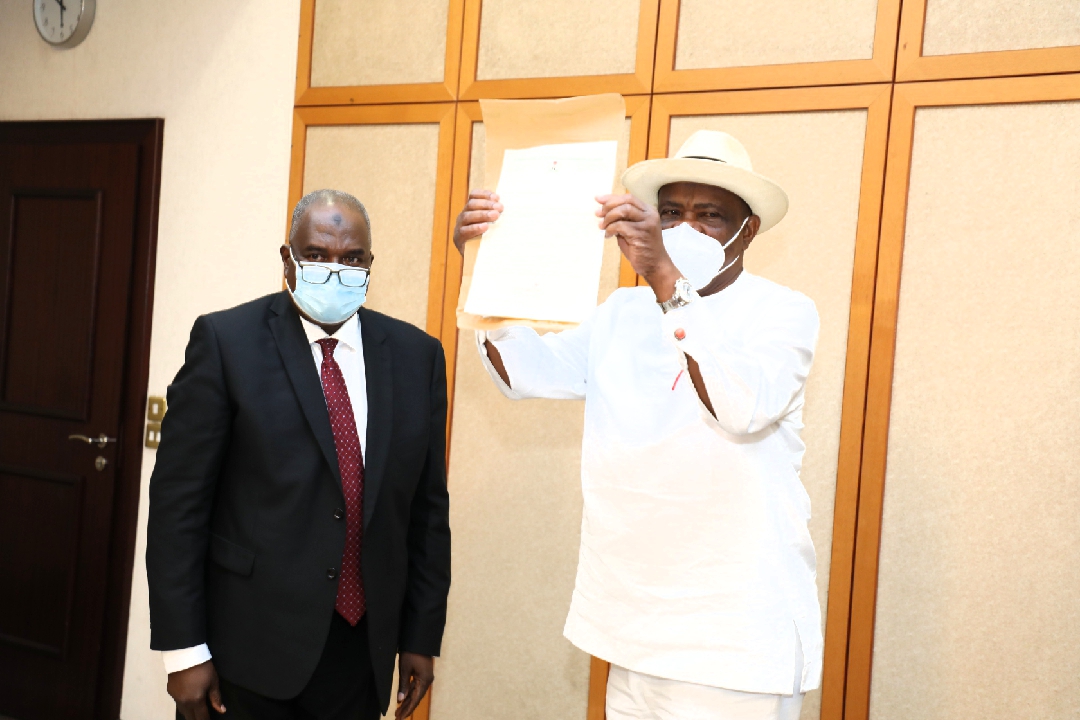 Governor of Rivers State, Nyesom Ezenwo Wike has received a formal letter of approval from the Attorney General of the Federation and Minister of Justice, for the establishment of a Nigerian Law School campus in Port Harcourt.

The letter was presented to Governor Wike by the Director General of the Nigerian Law School, Professor Isa Huyatu Chiroma at the Government House, Port Harcourt on Thursday.

Governor Wike in a statement by his Media Aide Mr Kelvin Ebiri said it was gratifying that the Council of Legal Education and the Attorney General of the Federation have graciously given approval to the Rivers State government to assist in the establishment of a Law School in Port Harcourt, an offer which was initially rejected by the immediate past administration in the State.

The governor commended the Attorney General of the Federation and Minister of Justice, Abubakar Malami, SAN, for his statesmanship and commitment to the growth of legal education in Nigeria.

“This is devoid of any political affiliation. I must commend him for this show of sportsmanship, for this show of leadership, that at the end of the day, it is Nigerians and Rivers people that will benefit from the establishment of this campus in Port Harcourt.”

Governor Wike explained that construction work had already commenced at the site approved by the State government for the Port Harcourt campus of the Nigerian Law School. According to him, the campus will be ready in the next six months and the Certificate of Occupancy for the school is ready.

“The six months that we have given is not six years. Six months is six months. Even if any other project will be suspended, let it be suspended. This project must be finished within six months. And I also urged you to appoint a Deputy DG who should move down to Port Harcourt immediately.”

The Rivers State governor informed that some corporate organisations, including banks have expressed their readiness to build hostels and library in the campus, pending the approval of the authority of the Nigerian Law School.

The governor urged the Nigerian Law School management to graciously immortalise the former Attorney-General and Commissioner for Justice for the Federation, Justice Nabo Bekinbo Graham-Douglas, SAN by naming the Port Harcourt campus after him.

The Director General of the Nigerian Law School, Professor Isa Huyatu Chiroma, said the process for the establishment of a Law School campus in Port Harcourt started on the 4th June in Yenagoa when Governor Wike threw a challenge that if given an opportunity, Rivers State government was ready to construct and deliver a new campus of the Nigerian Law School in Port Harcourt within six months.

He explained that afterwards, the Council of Legal Education met and unanimously agreed to accede to the request of the Rivers State government and this was also endorsed by the Attorney General of the Federation.

The Attorney General of the Federation in this letter to Governor Wike which was read by Professor Chiroma, said immediately he received the letter from the Rivers State government to assist in the establishment of a new campus in Port Harcourt, his office forwarded same, via Solicitor-General of the Federation and Permanent Secretary for consideration by the Council of Legal Education.

“I am delighted to convey to you the acceptance of your offer by the Council of Legal Education at its meeting held on 18th June 2021. A copy of the approval letter and a draft Memorandum of Understanding to guide or govern the conduct of the partnership project is hereby forwarded to you for your kind consideration and further action.

“While appreciating the kind gestures of the Rivers State Government in the promotion of legal education in Nigeria, please accept the assurances of my best regards and high esteem as always.”

Rivers State Attorney General and Commissioner for Justice, Professor Zacchaeus Adangor, said the Law School campus in Port Harcourt will stand out as one of the most iconic achievement of the Governor Wike’s administration.

The Chief Judge of Rivers State, Justice Simeon Amadi, commended the Attorney General of the federation and the Council of Legal Education for the approval and assured that the State will construct a befitting campus in Port Harcourt.

Former President of the Nigerian Bar Association, Onueze C.J Okocha, SAN, said though the new campus is in Port Harcourt, it will be for the benefit of all Nigerians and the legal profession.

The chairman, Nigerian Bar Association Port Harcourt branch, Prince Nyekwere applauded the approval and urged the Federal Government to devolve some of its obligation in the Executive List to the federating States.

We’re Not Borrowing From Banks To Finance Projects -Gov Wike