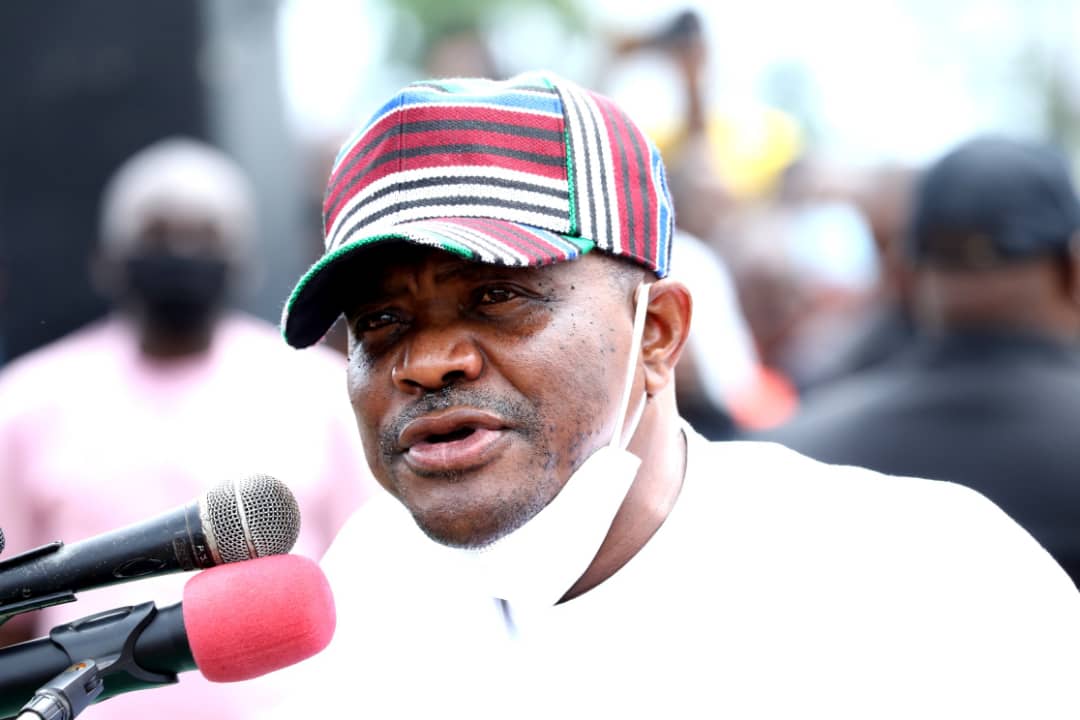 Worried that insecurity is spiraling out of control, Governor of Rivers State, Nyesom Ezenwo Wike has told Nigerians to reject the All Progressives Congress (APC) that only has tales of killings and kidnappings come 2023.

The governor in a statement by his Media Aide Mr Kelvin Ebiri gave the charge at the flag-off ceremony for the construction of Etche Campus of Rivers State University in Abara Town of Etche Local Government Area on Tuesday.

Governor Wike said with the total collapse of security in parts of the country, it is obvious that the APC federal government cannot be trusted with the future of the country.

“Don’t listen to those people who lie to you. Those who cannot provide security for Nigeria. Are you seeing the killings everyday now? Are you not worried about this country. Is there any hope that they can offer to this country again?”

Governor Wike boasted that unlike APC, the Peoples Democratic Party (PDP) makes promises and commit to fulfilling them without giving excuses.

According to him, his administration is on the first phase of a 45 days of project flag-off and commissioning that is unprecedented in the history of the country.

“You know the difference between us and them, is that you can see us everyday, moving from one local government to another. It is either we are flagging-off or commissioning projects.

“They are not doing so because there’s nothing for them to do. They don’t have anything to show too. We started on the 27th of May, 2021 and we will end the first phase on 10th of July 2021.

That’s more than a month of flagging- off or commissioning projects. Who has ever done so in this country? Have we not secured a place already in Guinness Book of records?”

Speaking further, Governor Wike urged Etche people not be indecisive in their resolve to pitch tent with PDP and deliver more votes to the party that brought development to them.

“Now, we are going to commission Odofur road, but with how many votes, mere seven thousand votes? You need something but you won’t come out and give the votes.

When we make promise, we fulfill it. You too, fulfill your own promise. It should be two ways, the party, PDP and you.”

Governor Wike insisted that the Rivers State University must release more funds to, and also supervise the contractors handling the construction work at the Etche closely.

He said his administration will not compromise quality work and declared that 40 plots of land will be acquired opposite the campus for the sitting of police station.

“We want quality job because we are known for quality projects. From now till May 2022, economy activities will increase here, so, please, Etche people, try and support the contractors to make sure they finish this job.”

Performing the flag-off, former Vice Chancellor of the University of Port Harcourt, Prof. Don Baridam opined that governor Wike is spreading development using sitting of campuses of the state university in other local government areas.

Such move, he noted, solves the usual complains of overcrowding of classrooms, increases the carrying capacity of the institution and solves the problems of inadequate hostels for students.

“Anybody watching Governor Wike’s blistering developmental pace, especially in recent times, will be tempted to believe that the man is just assuming office. But we all know that Governor Wike is embarking on more developmental projects even as he marks his sixth year in office as our Chief Servant. Contrary to what his implacable critics may say, Governor Wike’s bold signature is on display in every corner of Rivers State for even the blind to see. The good people of Etche can testify to this irrefutable fact today.”

Commissioner for Education, Prof Kaniye Ebeku noted that when Governor Wike first made the pronouncement and followed by the release of 16 Billion Naira to ensure that the three campuses are established, most people dismissed it as mere politics.

According to him, skeptics will now have no reason to doubt the sincerity of Governor Wike anymore because so far, two campuses have been flagged off for actual construction work to commence.

Vice Chancellor of the Rivers State University, Prof. Nlerum Okugbule, said the Senate and Council of the University have approved that that the Faculty of Agriculture which has the following departments; Agricultural Extension and Rural Development, Crop/Soil Science, Forestry and Environment, Food Science Technology, and Fisheries and Aquatic Environment, will be located in the Etche campus.

He explained that the decision was taken cognition of the acknowledged agrarian economy of Etche as the famous food basket of the state.

Nigeria Loses Over N400b As A Result Of Poor Sanitation, Open Defecation- Minister

Constitution Review: Tenure Of Office for All LGs Should Be Uniform, Fintiri Advocates