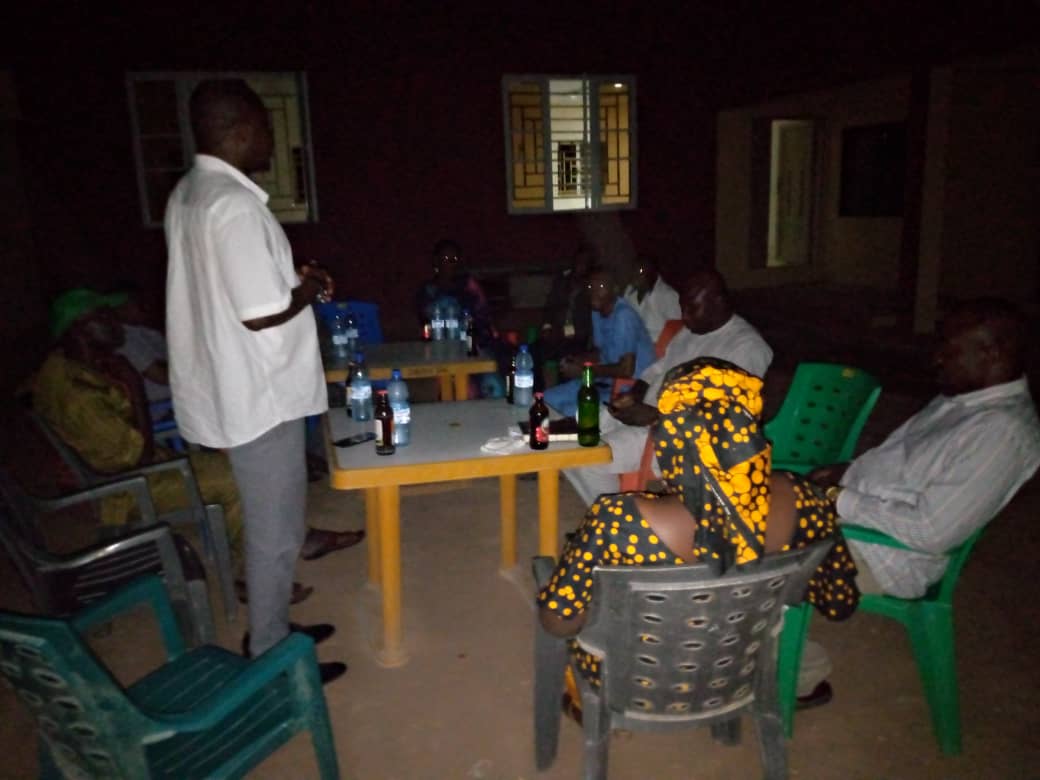 The Deputy National President, Sports Writers Association of Nigeria, SWAN, Alhaji Sadiq Abubakar Moyoyo has called on the Taraba State Football Association to ion out their difference for the benefit of football not only in the state but the nation at large.

Moyoyo made the call during a SUYA night recently organized by the Taraba state Exco under the leadership of Joachim Dangana, held in Jalingo, the capital city.

The Deputy National President explained that the crisis if continues, will no doubt hinder the progress of football in the state, stressing the need for both the Timothy and Sinusi’s factions to cement their differences and allow the FA remain one in the state.

Alhaji Sadiq Abubakar Moyoyo also called on the state chapter of SWAN to stay away from involving in the crisis between the two factions, believing that by the special grace of God, they will soon resolve their conflict for the benefit of football in state as well as in the interest of peace.

He however, commended the good initiative by the present administration of SWAN in the state for organizing a such event which was first of its kind and urged them to maintain the tempo.

The Deputy President noted that during his tenure as Chairman, the association had recorded a lot of achievements that includes securing two Secretariats SWAN at Jolly Nyame stadium Jalingo among others.

“I’m happy about what am seeing today, because all these period i have spent upto the time i handed over to my vice, Kabiru Usman Jalingo it did not down on us that we should organize something like this but we have done a lot for SWAN in Taraba state beside securing two Secretariats that i was abled to do among so many other things, i remembered we were about to secure a bus for the association during the late Governor, Danbaba Suntai when I left for National Secretariat but we couldn’t.

“But this initiative is came during the tenure of my brother, big friend and a colleague, Joachim and it is a very good initiative which will further cement the relationship that has been existing between us, just like somebody said in SWAN or in journalism there is no Christian, no Muslim, no Pegan, Wurkun, Jukun or Hausa or whatever, all we know is journalism.

“So, we are happy that all these initiatives are coming during his time and am not surprised because i know the caliber of people i sworned-in as Exco of the present administration” Moyoyo revealed.

Moyoyo who served for three terms as Taraba State Chairman of SWAN after completing his three years tenure as Vice Chairman of Taraba Nuj during the chairmanship of Emmanuel Ekwen, later became SWAN National Ex-Officio to National Vice President, North-east zone and now the second in command at the National level under the leadership of SWAN President, Sir Honour Sirawoo.

Earlier, the Senator Special Assistant to Govenernor Darius Ishaku on Agriculture, Hon. Terence Joseph attributed what is steering Nigeria as a country apart today to disunity among the people, pointed out that any where unity is to be foster, he makes sure he is part of it and that was what made him honoured the invitation by SWAN.

He charged the state chapter of SWAN to embark on an awareness enlightenment campaign through the media on the need for people to understand the importance of exercise and encouraged them to engage in exercise, including the top government officials for their phisical fitness, adding that it will also help the association to become more vibrant in writing sports activities in state.

In his remarks, a friend of SWAN in the state, Mr. Bako Rimamsikwe described SWAN as a symbol of unity, saying that the SUYA night was encouraging and urged them to keep it all, adding that the event was also a way of creating unity among the people irrespective of their differences and urged them to sustain.

Earlier in an opening remarks, Taraba State SWAN Chairman, Joachim Dangana said the event promised to make the such event as an avenue for members and associates of the association to discuss and share ideas on how to move SWAN forward in the state.

Meanwhile, another SSA to Governor Darius Ishaku, Yusuf Aliyu was among those that graced the occasion.