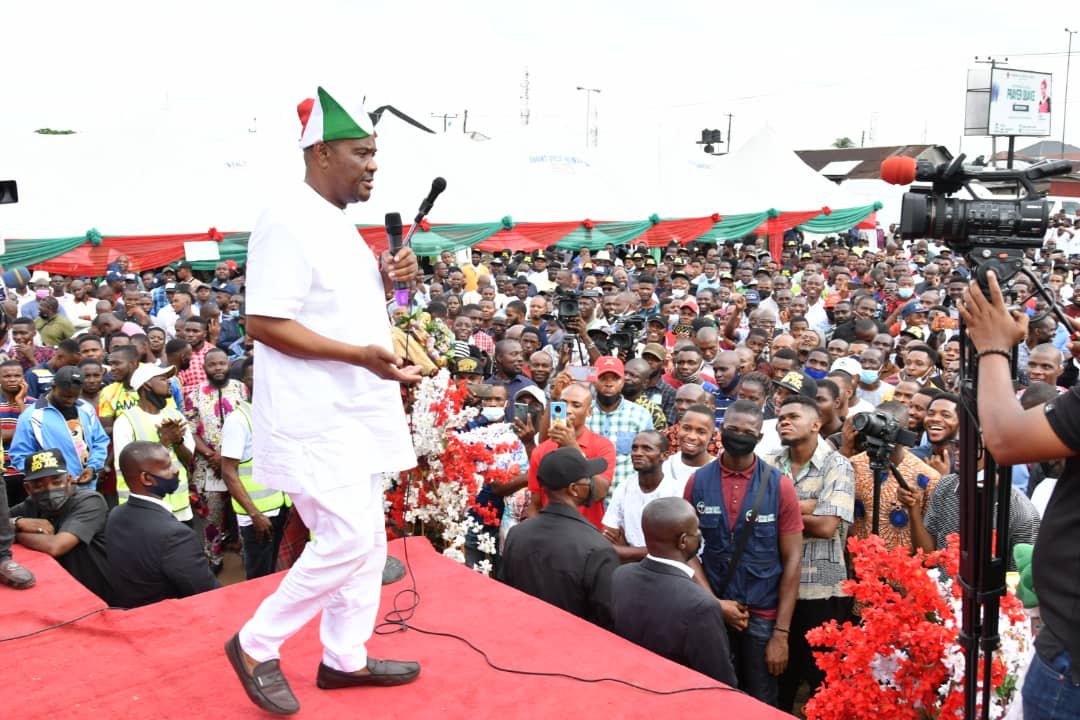 Governor of Rivers State, Nyesom Ezenwo Wike has accused the Minister of Transportation, Chibuike Amaechi of embezzlement of proceeds from the sales of the state aircraft and power stations.

He has meanwhile offered to resign from office, if Amaechi can mention any federal project he has attracted to Rivers State as a minister since 2015.

Governor Wike in a statement by his Media Aide, Mr Kelvin Ebiri stated these at the formal defection of two former chairmen of All Progressives Congress (APC) in Rivers State, Dr. Davies Ikanya and Hon. Igo Aguma, as well as other chieftains of the opposition to the Peoples Democratic Party (PDP) in Port Harcourt on Saturday.

The governor explained that Amaechi, who is his predecessor had claimed he sold a Dash 8 aircraft purchased by former Governor, Dr. Peter Odili administration to Government of Cross River at the cost of $6million, but has failed to account for the proceeds of the transaction till date.

Similarly, the governor disclosed that through intelligence, the state government was able to trace a second aircraft belonging to the State government that was also purchased by the Odili’s administration to Germany, where Amaechi had clandestinely diverted it to in 2012.

Governor Wike said Amaechi’s reign in office as governor was characterised by financial malfeasance.  To buttress this , the governor maintained that the $308 Million paid by Sahara Energy to acquire the State independent power projects was diverted by the Minister.  In addition, he said Amaechi had spent $39.9 Million of State funds on non-existent, Justice Karibi Whyte hospital in Port Harcourt.

The governor, who cited several projects he attracted to Rivers State while he was Minister of State for Education under the President Goodluck Jonathan administration, challenged Amaechi to emulate him by reviving the moribund Port Harcourt seaports in order to create employment opportunity for Rivers’ youths.

Governor Wike narrated that but for his intervention, former Commissioner for Urban and Rural Planning, Dr. Reason Onya, who recently defected to the APC would have been charged for murder following his indictment by a judicial panel of inquiry that investigated a multi-story building that collapse in Port Harcourt and claimed several lives in 2018.

The State PDP chairman, Ambassador Desmond Akawor said the defection of Dr. Ikanya, Aguma and others marks the formal interment of the opposition party in Rivers State.

Narrating his reason for leaving the APC which he founded in Rivers State , Dr. Davies Ikanya explained that he cannot with good conscience remain in a political party that was built on deception.

According to him, all the expectation that the APC will provide security, create employment opportunities and better life for Nigerians have turned out to be a mere mirage.

Ikanya, who remains the only elected chairman of the APC in Rivers State, said it was regrettable that the party has been hijacked by persons who place their personal interest far above the party.

He used the occasion to apologise to the governor and people of Rivers State for introducing the APC to the State, which has been peacefully governed by the PDP since 1999.

On his part, the immediate past caretaker committee chairman of APC, Hon. Igo Aguma accused Amaechi of brainwashing him and others to join the APC.

He called on the Attorney General of the Federation to immediately investigate finances of the Niger Delta Development Commission (NDDC) between 2016 and 2019.

Igo called for the prosecution of the Minister of Transportation for mismanagement of over $317 Million allegedly spent on 1.5 kilometer now abandoned monorail.