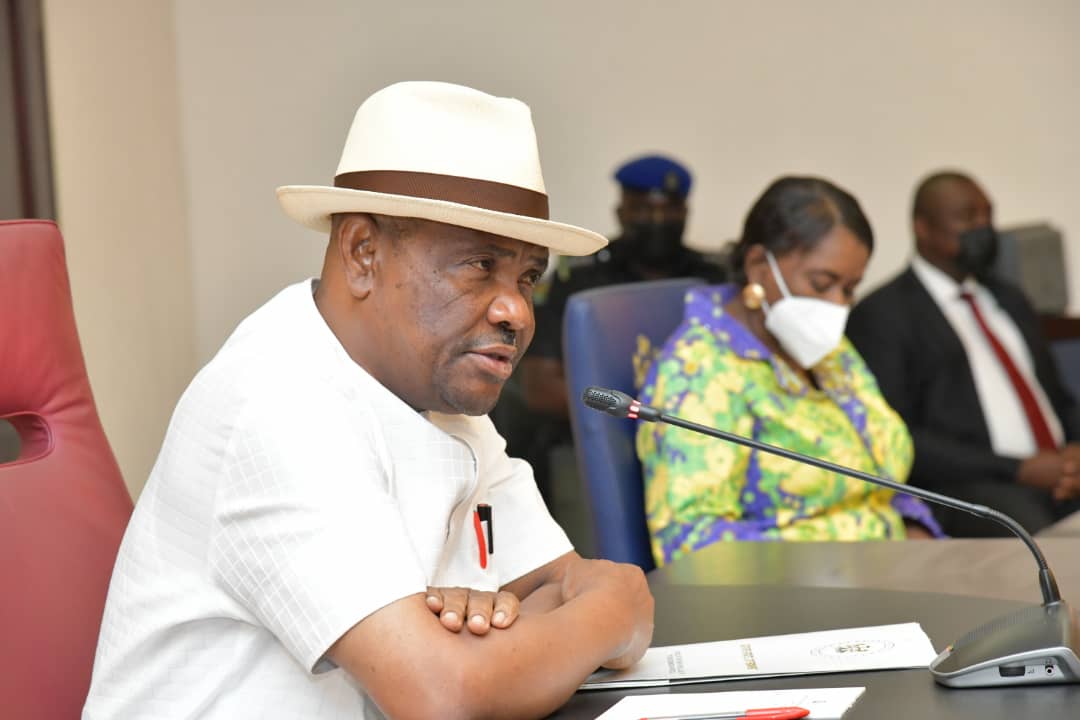 On Tuesday, May 4th, 2021, Governor Nyesom Ezenwo Wike re-emphaszied the declaration that no separatists, whether individuals or groups, will be allowed to annex Rivers State under his watch.

He therefore warned those who are bent on taking advantage of the hospitality of Rivers people to hatch their secessionist agenda, to take such clandestine activities elsewhere.

Governor Wike gave this warning when the traditional rulers, political and opinion leaders of Ekpeye Nationality paid him a solidarity visit at Government House, Port Harcourt.

The governor stated that his administration would leave no stone unturned in protecting the state and Rivers people against such persons or groups, who think they can annex the state by dragging her into their separatist agenda.

“Rivers State does not belong to any other place. It is an autonomous State. Nobody in other States can come and tell us that we are with them, No! I will not allow anybody to enter this State to tell us that we are part of them. We will do everything we can to protect the interest of our State.

“We are a friendly people. We will allow anybody to come here and do business. But nobody should go beyond doing business, to hoist any unnecessary flag here. We will not take it,” he declared.

This is not the first time that Governor Wike has pronounced this warning against actual or perceived separatists, who have periodically attempted to clandestinely annex specific parts of the state. But the declaration has become more fervent, against the backdrop of recent incidents of heightened insecurity, especially across the Southern parts of the country and the acerbic threats and incendiary verbal brickbats between regional strongholds.

This action was allegedly carried out by the separatist Indigenous Peoples of Biafra (IPOB). The State Government, working on the advise of the State Security Council imposed a 24 hours curfew on Oyigbo, as well as some parts of Port Harcourt municipality, which had been identified as potential flash points.

Governor Wike subsequently signed an Executive Order re-proscribing the activities of IPOB, which had earlier been classified as a terrorist organization by the Federal Government and proscribed by a Federal High Court.

Addressing a meeting with all the 23 Local Government Chairmen, Community Development Committees and youths leaders in Government House, in Port Harcourt on Monday, October 23, 2020, Governor Wike had warned that any council chairman who allowed IPOB to hold processions and hoist its flag within their jurisdiction in Rivers State, risked sack.

Describing Rivers state as the most accommodating state for all Nigerians, Governor Wike stated that there had never been any historical incident of different ethnic groups clashing in the State as had been the witnessed in other parts of the country.

He maintained that the people of Rivers State believe in the unity of the country, but can never be annexed to any State because it is geographically and constitutionally in the Niger Delta.

Clarifying the issue further in a live television programme on Monday November 2, 2020, Governor Wike said: “I know that this is not the first time IPOB has used Oyigbo as launching ground. The security agencies are aware. IPOB added a new dimension this time. They killed six Army officers and burnt one. They killed four Police Officers. They destroyed all the Police stations and court buildings. What offence did we commit as a state?

“I imposed curfew to restore calm. I proscribed IPOB activities anywhere in the state. Don’t forget that the Federal Government had declared them a terrorist group. It is not the entire Igbo that believe in IPOB activities. I will not fold my arms and watch criminals destroy my State.

“They made attempts to rename a local government in my state and hoist its flag in a public school in Komkom Town. That alone is a signal. I will not agree to that. I know who is doing all these; who has told them to rise, protest against Wike,” he said.

It is on record that on May 27th, 1967, under the administration of General Yakubu Gowon, Decree No. 14 was issued, which led to the creation of Rivers State.

All these are of course recommended reading, especially for those who nurse separatists intentions and would rather believe naively, that they could just arrogantly exploit the historical and traditional characteristics and attributes of the Rivers peoples, who are by nature most accommodating, friendly and hospitable.

To hoist a flag or annex any part of the State will never happen when a brave, courageous, firm and determined leader like Governor Wike, who is passionately and completely Rivers, is on the saddle.

Suffice it to say that since the creation of the State in 1967, Rivers State has not only remained an integral part of the Nigerian nation, but has maintained its historical and cultural homogeneity, manifested progressively in traditional strongholds, with proud, sophisticated and confident yet accommodating authority between and amongst its indigenes and residents.

It is important therefore, to inform those pursuing a separatist agenda, that there is a well recognized and legitimately accepted process, both universally and within the constitutional/gazzetted decree provisions of individual countries, for the emergence of new nations and the creation of new States.

Nigeria, as a nation emerged through that process and Rivers State was created by the legitimate provisions that defined the administration of the period.

Even the creation of Bayelsa State out of the old Rivers State, by the military government of late General Sani Abacha, on October 1, 1996, followed the same legitimate processes that have defined the creation of the other states in the country.

As far as Governor Wike remains the Governor of Rivers State, no surreptitiously misplaced attempt of separatist fervor nor an ill-advised and ill-intentioned flag hoisting with the vile and naive intent of annexing any part of Rivers State, will see the light of day.

No attempt to subvert the laid down constitutional identity of the Nigeria nation as one united, indivisible entity will even diminish the true quintessence of the fundamental, irrevocable Rivers essence.

Governor Wike’s advise to the Ekpeye chiefs and opinion leaders who paid him a courtesy in Government House, to be vigilant to know what happens around their communities and also to report suspicious characters, is not only germane at this critical time in our evolution as a nation, but resonates loudly as a clarion call directed to all Rivers people.

Nsirim is the Commissioner for Information and Communications, Rivers State

Fire Breaks Out At INEC Office In Abia