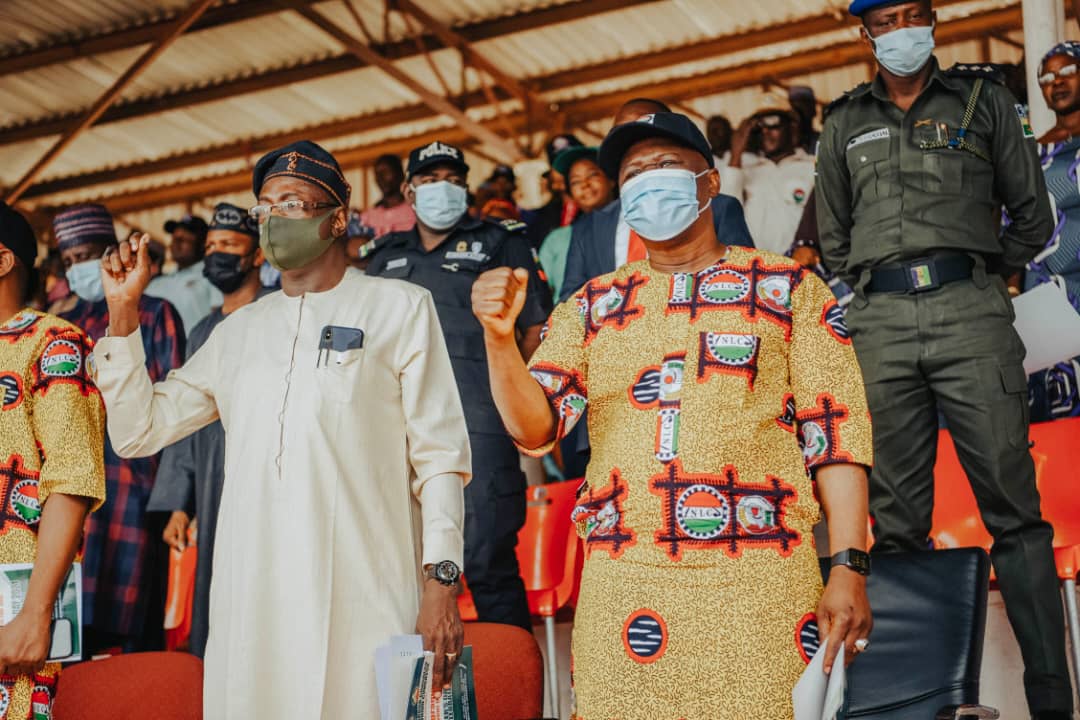 In commemoration of the 2021 International Workers’ Day Celebration, Governor Ahmadu Umaru Fintiri of Adamawa State revealed that the state government has introduced far-reaching reforms in the Civil Service that have effectively dispelled favoritism.

At the ceremony that held at Mahmud Ribadu Square, Yola on Saturday, Governor Umaru Fintiri said the present administration has also carried reforms in the recruitment, training and promotion of Junior and Senior cadre personnel.

He added that since the coming of his administration on board in twenty nineteen “government has ensured that the Civil Service has been assured a pride of place as the Centre piece of his Eleven Point Agenda.”

He added that “in a bid to reverse the sad story of the Civil Service and restore its dignity, the government has introduced promotion examinations for Civil Servants from Grade Level ten upward, including prospective Permanent Secretaries.”

On the issue of minimum wage, the Governor said Adamawa was “the first and only State to implement the Thirty-Two Thousand Naira, which is a departure from what was negotiated by other States and the Federal Government.”

“It is worthy that as part of my Government’s irreversible commitment to improve the condition of service of the entire workforce, we were the first and only State to implement the Thirty-Two Thousand Naira (N32,000.00) Minimum Wage, which is a departure from what was negotiated by other States and the Federal Government.”

This according to the Governor in addition to the implementation of the over ten year promotion of Primary and Secondary School teachers, science subject allowances, training among others.

He said government has realized that “even though these measures were incumbent, their non-implementation before now had adversely affected the entire system, to the extent that his administration was forced to start from square one.”

The Governor said the resolve of his administration to remain consistent in every facet of human endeavor remains unshakeable despite daunting challenges of the COVID-19 Pandemic and the attendant economic crunch.

He appreciates the organized Labour in the State “for towing the path of industrial harmony and embracing dialogue as an imperative to resolving disputes and acknowledged the eternal contributions of workers.”

In his remarks, the State Chairman Nigeria Labour Congress NLC, Comrade Emmanuel Fashe spoke on the non-implementation of the new national minimum wage to the local government workers and appealed to the governor to look into their plights.

He called on Governor Umaru Fintiri to pay the twenty twenty and twenty twenty one leave transport grant and offset the baglock of arears of the allowances to cushion the effect of workers in Adamawa.

On his part, the State Chairman of Trade Union Congress (TUC) Comrade Nasiru Babale commended Governor Umaru Fintiri for being workers friendly and urged him maintain the momentum for the good of the civil service and the state as a whole.

“This Government remains conscious of its outstanding obligation to workers and several teething issues that have continued to emerge. We will continue to explore every means to resolve all outstanding issues, even as we will not succumb to undue pressure or arm twisting tactics.”

“As citizens who share a common dream of making Adamawa Great Again, we must find common ground to settle differences without unnecessary rancor,” he said.