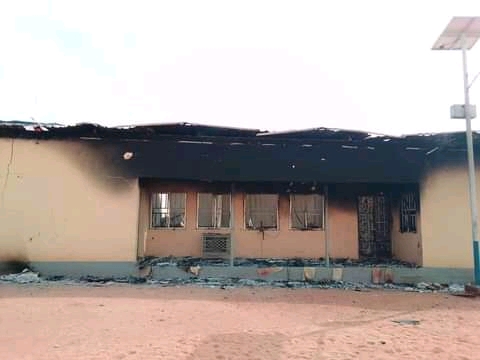 The Adamawa State Governor, Rt. Hon. Ahmadu Umaru Fintiri has condemned in strong terms the unruly behaviour of students of the Adamawa State polytechnic which led to the destruction of facilities in the institution.

He stated this shortly after inspecting the damaged structures said government will act accordingly when it receives the report from the committee constituted.

The Governor while expressing dismay over the behaviour of the students said “it is premature for me to reveal government stand” as the investigative committee set up is yet to come up with its report.

He opined that the students who are meant to graduate with a certificate in character and learning have failed stating further that their actions depict that they can’t be good future leaders.

As government awaits the report of the committee the Governor expressed willingness to abide by all its recommendations.

Rector of the institution, Professor Ibrahim Umar commended the Governor for coming to inspect the level of damage stating that the committee has two weeks to ascertain the remote cause of the mayhem, assess level of damage, cost implications, fish out culprits and proffer solutions.

It could be recalled that while the Governor was away on an official function, some graduating students of crime management and control on Thursday 25th March staged a riot sequel to an earlier circular stopping them from carrying out a sign out party which led to the destruction of property and indefinite closure of the institution.

According to some residents of Yola, the Adamawa State capital, the incidence was unfortunate despite the struggle by the Fintiri led administration to revamp the education sector, teeming youths who should be agents of change were working against the realisation of the noble course.