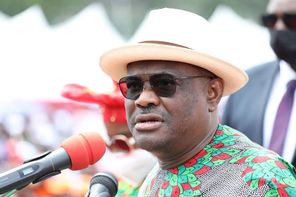 Rivers State Governor, Nyesom Ezenwo Wike, says the signing of the contracts for the Trans -Kalabari Road project phase one, and the Saakpenwa-Bori -Kono Road project phase two is to demonstrate the importance his administration places on opening up more rural communities for development.

Governor Wike in a statement by hi media aide, Kelvin Ebiri stated this shortly after the contracts were signed for the construction of the major roads at Government House Port Harcourt on Wednesday.

Those who signed for the Rivers State Government were the Attorney General and Commissioner for Justice, Prof. Zacchaeus Adangor, Commissioner for Works, Elloka Tasie-Amadi and the Permanent Secretary of the Ministry of Works, Mrs. Ebere Emenike.

Governor Wike said with a secured payment plan of N1 billion monthly to be paid into the accounts of the construction companies, the deadlines for the two projects will not be compromised.

According to Governor Wike, the two road projects are very important to his administration because they will improve the economic activities of the benefiting communities.

“If there is one road that must be completed within time, it is that Trans-Kalabari Road. It is very key to us, to link up so many communities within the Kalabari area.

“So, we have tied our funds to these roads, by every month; you don’t need to come to us, or write to us to say you’ve done 50 metres, 100metres or 1kilometres, no.

“The money is paid to you directly every month by the banks. N1billion each. For the Trans-Kalabari road, which is about N13 billion. We believed that you have no excuse not to finish the road in 14 months.”

Governor Wike urged the benefiting communities to owe the projects by ensuring that they cooperate with contractors and avoid bothering them with unnecessary demands that can create crisis to stop the projects.

According to the governor, the companies have also been told to engage indigenes of the areas in direct, and contract employments including opportunity to supply materials used on site.

“Move in and make sure that you deliver. I am going to commission those roads next year. Any project we have awarded must be completed before we leave office.

“I hear people are criticising us that we are doing roads everywhere. How do you develop a community without roads? The key thing to development is road infrastructure.

“How do you promote agriculture when you cannot evacuate whatever you have produced from the farm. How do you talk about human capital development when students cannot have roads to go to school. Even to access healthcare service you need road to go to the health facility. No investor can come to a place when there are no roads.

Speaking further, Governor Wike explained that the Commissioner for Environment, Dr. Igbiks Tamuno was sacked because he engaged in acts that amounted to sabotage.

“I don’t know how a commissioner can write to a company to stop work without my approval. And Julius Berger in that matter, to stop construction in the entire State, I have never heard of such thing before. I didn’t know that commissioners have so much power like that.

“I’m saying it because some of you don’t even know the limits of your power. These are contractors working for the state government. He (Tamuno) never interfaced with the Ministry of Works. We have paid Julius Berger and you ask them to stop work, so that they will come and ask for variation later?”

In his speech, the General Manager of CCECC, Zou Xiaowei said the signing of the contract is another milestone in the development of Rivers State and pledged that they will deliver the Saakpenwa-Bori -Kono phase two project with the best quality.

On his part, the General manager of Lubrik Construction Company, Rabih Elramedi said they are thankful for the opportunity to contribute to the development of the State and pledged to achieve the project for benefit of Rivers people.

Why I Won’t Travel Abroad For Treatment, Wike Boasts