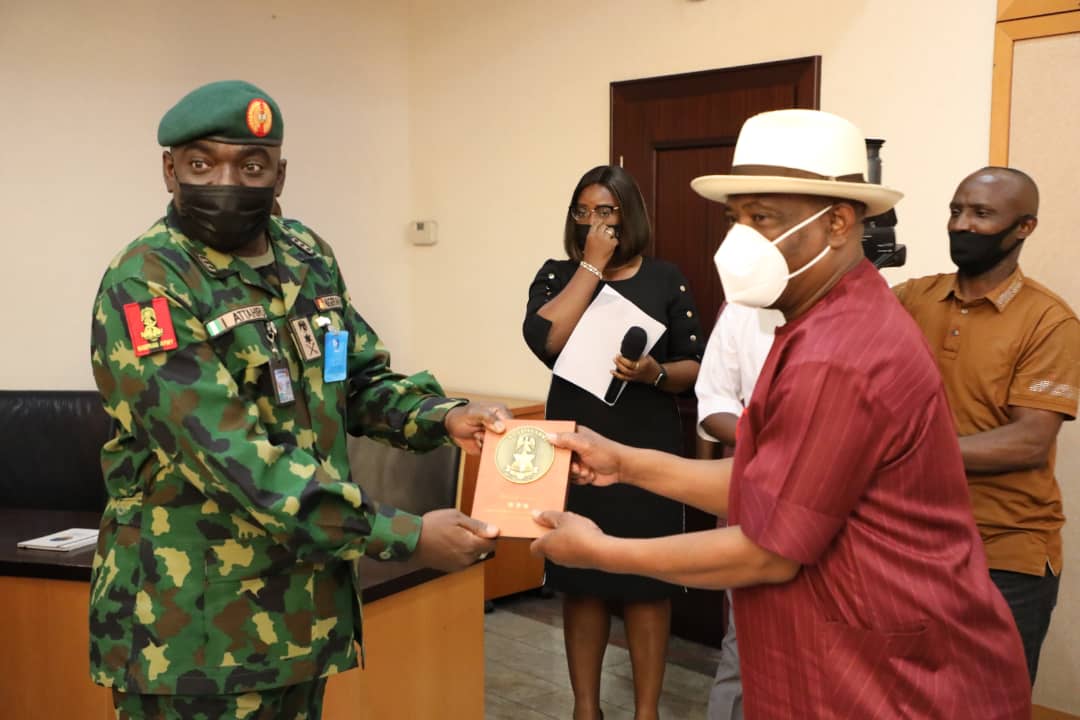 He said such call has become imperative owing to the despicable role played by the immediate past Chief of Army Staff who was not only grossly partisan but encouraged other Army officers to become political collaborators.

Governor Wike in a statement by his media aide, Mr Kelvin Ebiri gave the charge when he received the Chief of Army Staff, Lt. General Ibrahim Attahiru, on courtesy visit at Government House, Port Harcourt on Tuesday.

The governor said such political involvement saw the Army attempting to upturn the mandate of Rivers people during the last general elections.

“We know that with the kind of experience you have, and with your level of education, the difference will be clear. Let me use this opportunity to say there is a need for you to make a difference, to bring back the respect Nigerians use to have for the Armed forces.

“In those days when you see a soldier you run, these days it is difficult because soldiers have been exposed to politics. I want you to make a difference, to say your interest is to protect Nigerians; to fight bandits, to fight insurgency and not to carry ballot boxes.

Governor Wike also challenged the Chief of Army Staff to be more patriotic to the country and stop the role the Army and other security agencies play in encouraging non performance by elected political office holders.

He said if politicians know that soldiers and police officers will not be contracted to rig elections for them, they will be more responsive to the electorate because their votes will count.

“Election in Nigeria is no longer determined by performance. It is determined by you being connected to security agencies and INEC. If it was based on performance you’ll see most politicians will change. If you don’t perform they will vote you out. “

Speaking further, Governor Wike acknowledged that the new Chief of Army Staff has started off his assignment well, which has begun restoring public confidence in the Army.

Governor Wike harped on the need for the withdrawal of Army officers drafted as security personnel to guide politicians because it reduces the number of officers available to protect the sovereignty of the country.

“I believe you will show difference that you are not here for politicians . You’re here to protect the territorial integrity of Nigeria. From the little you have done since you came, we are beginning to see difference, but don’t change.”

He urged him to continue on the path of professionalism, commit to fighting cultists, insurgents and all criminality, to ensure that Nigeria is safe.

The governor reiterated that he will never tolerate any secessionist group that wants to use the State as base for its nefarious activities.

“All those who are talking about their independence, they can go anywhere, but not from here. We are not part of any secession.

“We will support the Army and other security agencies to make sure they reduce the level of crime and criminality in this State.”

The Chief of Army Staff, Lt. General Ibrahim Attahiru said he was in the State on assessment of 6 Division of the Nigerian Army.

Lt. General Ibrahim Attahiru commended the governor for the prevailing peace and security in Rivers State and his zero tolerance for separatist groups

“I also thank you for your continued non tolerance approach against separatist groups and also your contribution in promoting peaceful coexistence among the various communities that lives in Rivers State.”