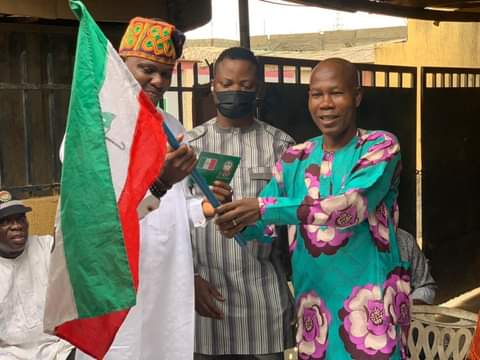 He is one of the formidable opposition voices to the goverment of the day.

The powerful politician has re-joined PDP, amidst wild jubilation by his followers and members of PDP in Lagos State.

He has directed all his followers to also join PDP in their respective States, across the country.

Receiving Adelaja back to PDP in his ward, was the Secretary of Elders council, Elder Olajide Adedeji Canon, ward Chairman, Mr. Gbenga Fajuke and other members of the ward executives.

Recall that Adelaja had embarked on a consultative tour to various leaders, such as Former President Olusegun Obasanjo, Oyo State Governor, Engr Seyi Makinde, Otunba Segun Adewale popularly know as Aeroland and also planned to meet the Chairman of PDP’s reconciliation committee, Senator Bukola Saraki and other notable leaders of the PDP.

Giving update on his political move, Adalaja said “I have returned to PDP– a pleasant home, and it is time for all of us to join hands to rebuild the party.”

“In our quest to rebuild PDP, we must all eschew all forms of rancor as members across board, and team together, to be able to rescue Nigeria in 2023, from the claws of the rent seekers APC, currently misdirecting the affairs of the country.

“As I have now returned home, I will work with all Democrats within the party, in order to move our party and the country forward,” urging all Stakeholders to keep supporting the leader of South West, Engr. Seyi Mak.