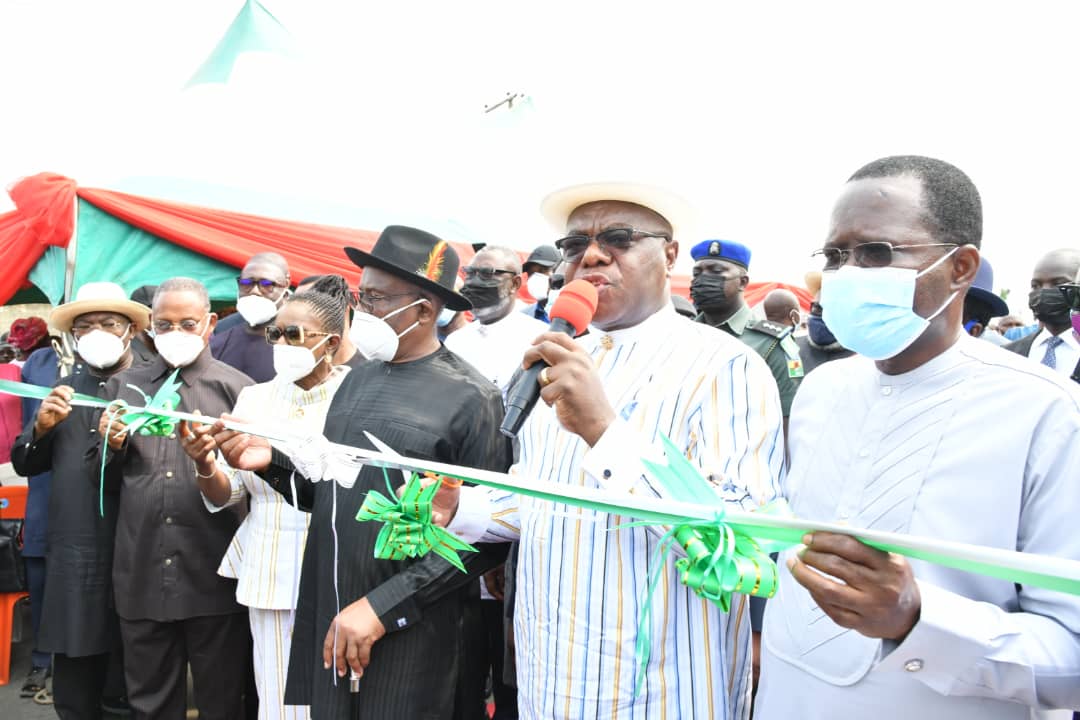 Rivers State Governor, Nyesom Ezenwo Wike has accused the All Progressives Congress (APC) led federal government of shielding the Minister of Transportation, Chibuike Amaechi from prosecution over misappropriation of proceeds from the sales of some the State assets.

The governor said it is disingenuous for the Federal Government to flag off narrow gauge railway from Port Harcourt to Maiduguri at a time when the rest of the world is building standard gauge railway.

The governor said it is appalling that the Federal Government has continued the shield of Minister of Transportation from prosecution for his inability to account for $308 Million from the sales of the State owned power plant and other critical assets when he was the Governor of Rivers State.

Governor Wike noted that it is because the federal government is protecting the Minister that he has consistently made efforts to undermine the State government by influencing who is to be posted as Commissioner of Police and General Officer Commanding of the Nigerian Army to Rivers State.

The governor urged the people of the State not to be deceived by antics of the APC government following the flag off narrow gauge rail line from Port Harcourt to Maiduguri. According to him, the project flag off is politically motivated.

“I heard people came to Rivers State to flag off narrow gauge (rail) when the world is talking of standard gauge. What they are giving Rivers state is narrow gauge because I challenged them, show us what you have done for the people of the State. So, what they will do is to come and say okay, since you are complaining let us come and give you that narrow gauge.

“Instead of giving us the standard gauge to Maiduguri and they are making noise about it. Rivers State, the treasure base of the nation, the State that they used their money to produce their President. Towards the end of their administration is when they come and tell us of narrow gauge railway.”

He added: “You want to finish the narrow gauge in 33 months. Will he be in power then? I am going to finish every project I have awarded, this Government will finish it.”

The governor explained that the proposed University of Transport in Ubima , Rivers State ,is deceitful because the Minister of Transportation lacks the capacity to see the project through.

According to him: “Since 2015 it is now you want to go to Ubima to build University of Transport.”
Governor Wike said despite his Amaechi’s vehement opposition to his political aspiration to govern the State in 2015 and 2019, he had been elected twice as governor.

He further added: “But let me warn the man who thinks he has President , he has soldiers, he has police, you should have learnt your lesson by now , that when God has left you there is nothing you can do again.”

Former Deputy Speaker, House of Representatives, Sir Austin Opara, said at a time when the federal and state governments are struggling with COVID 19, Governor Wike has instead being commissioning and flagging off projects across the State.

“Federal Government has relied on the disturbances of COVID 19, states are grappling with inability to pay salaries, you are still commissioning projects, you are breaking grounds, you are commissioning more projects. Indeed, it gives concern, what is the magic.

“When you started, your critics what they were saying was that even what he is doing, he is just working in Port Harcourt and Obio/Akpor, you immediately started commissioning projects in Eleme, Tai, Gokana, Khana, Akuku-Toru, Ikwerre, Emohua and many other Local Governments, then they kept quite.”

Opara noted that the announcement that the Rivers State will be building a Cancer and Cardiovascular Disease Centre worth 25 Billion Naira soon is gladdening.

He said in a civilized clime, the Federal Government should have sent a delegation to Rivers State to understudy Governor Wike’s government, to indeed imbibe and learn what is the secret of his success.

“So, indeed I recommend to the APC led Federal Government to send a high powered delegation to Rivers State to understudy the infrastructural revolution that is taking place in the state.”

Rivers State Commissioner for Works, Elloka Tasie-Amadi, said the Omuihuechi-Omuoko-Omokiri road before the administration of Governor Wike was a well established nightmare for residents and road users.

He explained that the reconstructed road 6.1km long, 7.3m wide road complete with drains on both sides which measure 12.2km .

It is of benefit to real estate development within and around Aluu.”