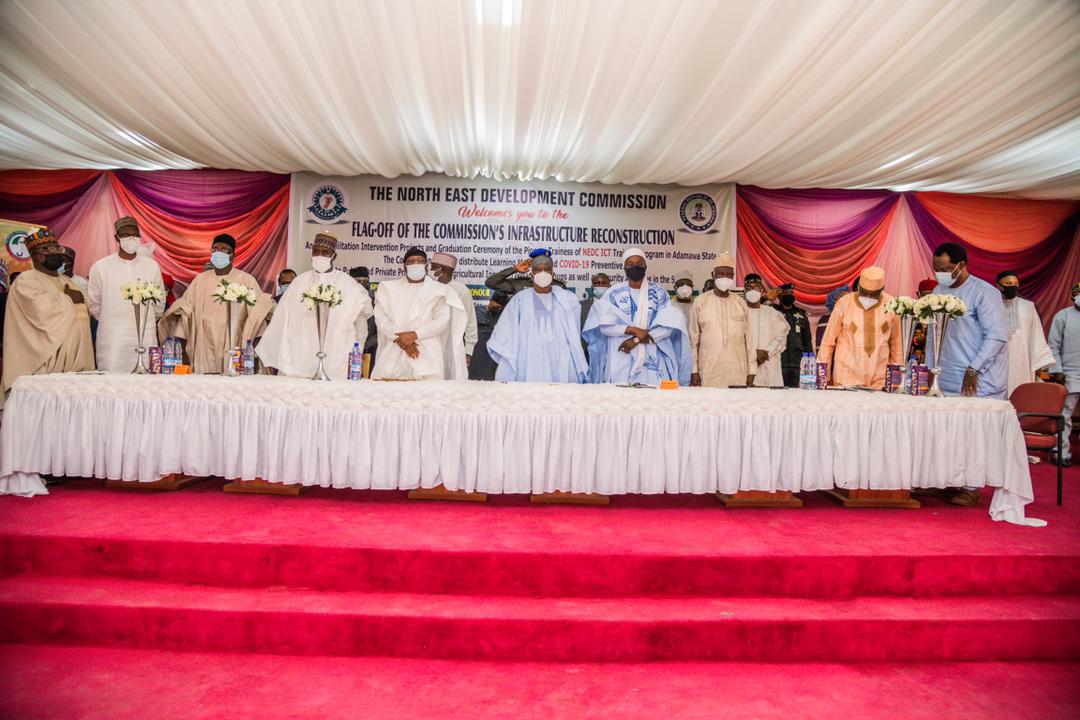 The North East Development Commission NEDC Tuesday flagged off Reconstruction of Roads and Bridges destroyed by activities of Insurgents since twenty fourteen in Adamawa.

Similarly, the commission has also distributed learning materials and Covid-19 preventive Items to public and private primary schools, agricultural inputs to organised groups as well as security agencies in the state.

At the event that held in the Banquet Hall, Government House, Yola, Governor Ahmadu Umaru Fintiri said the projects are in sync with the determination of his administration to make Adamawa work for all.

He appreciates President Muhammadu Buhari, the Ministry of Humanitarian Affairs and Disaster Management as well as the NEDC team for rekindling hope in the People cut off from other parts of the Country by activities of insurgents.

“It is in fulfilment of the promise that we made to the People of Adamawa State to deliver more accessible roads that informed our embarking on massive road projects across the State and today most of our rural communities are accessible, while other urban roads are ongoing all in a bid to make the State that Land of Beauty especially when the two Upper and Underpass roads referred to in the Nigerian parlance as fly over are completed,” he said.

The Governor said the projects are happening at a time when the national economy is facing financial challenges, but his administration is able to inject funds into the economy of the State, thereby stimulating employment and engaging the business sector.

He expressed happiness that his repeated visit to the corporate headquarters of the NEDC and discussions with the Minister of Humanitarian Affairs and Disaster Management have yielded result that the people stand to benefit from.

The Chairman Governing Board NEDC, Retired General Paul Tarfa lauded the giant strides so far achieved by Governor Umaru Fintiri in Adamawa, declaring that the commission is proud of him urging him to maintain the spirit.

The Managing Director and Chief Executive Officer of NEDC, Mohammed Goni Alkali, said the Ministry of Works and Housing has entered collaborative arrangement with the commission to co-fund the projects.

“The first project to benefit from this co-funding collaboration is the reconstruction of the three bridges at Kudzum, Dilchim and Wuro Ngayadi in the state that were blown up during the early days of the insurgency,” he said.

He added that the commission will as part of the general collaboration with the federal ministry of Works and Housing will also construct the three bridges on the newly awarded eighty kilometre Jabbi Lamba Belel road contract.

Earlier in his welcome address, the Secretary to the State Government SSG, Malam Bashir Ahmad noted with appreciation the flagged of the projects as part of the primary responsibility of the NEDC.

The event was attended by the representative of Hajiya Sadiya Umar Farouq, Minister of Humanitarian Affairs, Disasters Management and Social Development that of Barrister Babatunde Raji Fashola minister of Works and Housing.

Highlight of the event was presentation of certificates and starter packs to the pioneer of NEDC graduands, learning materials, Covid-19 preventive items and Agricultural inputs to beneficiaries.

CBN And CRYPTOS: Defending The Financial System And Economy